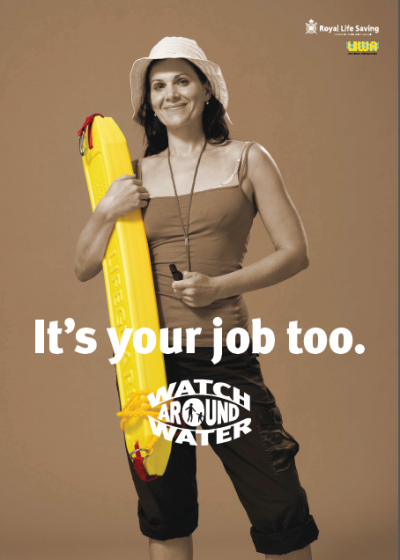 A new report by the Leisure Institute of WA Aquatics and the Royal Life Saving Society WA reveals that the popularity of public swimming pools in Western Australia is increasing with over 10.4 million visitations recorded over the past year - with the majority of these being young children.

However, children consistently record the highest rate of injury at public swimming pools than any other age group underlining why the Watch Around Water safe supervision program is so essential.

The Watch Around Water program has been in place in Western Australia since 2004 following a number of drowning incidents recorded at public swimming pools.

The program’s key message is that while lifeguards have an important role to play in aquatic centres, parents, mature family members and caregivers of young children need to take a proactive supervision role.

Its key message is ‘We’re Not Babysitters! - Parents Supervise, Lifeguards Save Lives’.

“The sharing of responsibility for supervision of young children between lifeguards and parents has seen a remarkable shift in behaviour regarding the level of parental supervision.

“Watch Around Water has been in place for over 12 years and not one drowning involving a young child has been recorded in our public pools during this time which is a great achievement.”

The Mandurah Aquatic and Recreation Centre has been a part of the Watch Around Water program since its inception and has recently reopened after a significant redevelopment.

Long serving pool lifeguard Debbie Mills knows too well the importance of parental supervision of young children while at public swimming pools, stating “it is concerning how often parents drop off young children at the pool or leave them unsupervised in the water – lifeguards are not babysitters!

“We need parents to realise that they can’t check their responsibilities at the door.

“Even though lifeguards are on duty, parents still have a crucial safety role to play to keep children safe.”

With summer here and school holidays about to start the Leisure Institute of WA Aquatics and the Royal Life Saving Society WA are urging all parents to be aware of their supervision role when visiting their local pool.

For more information go to www.watcharoundwater.com.au