New Report says supermarkets must do more in fight against obesity 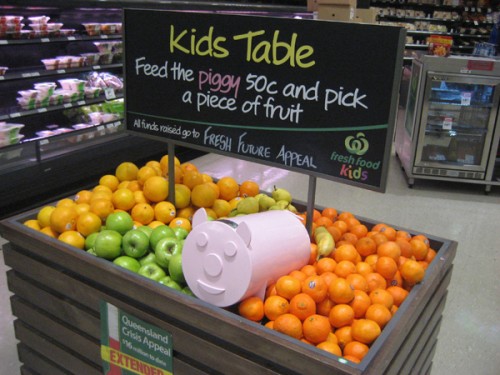 Australian supermarkets need to take more responsibility for obesity prevention, according to a first-of-its-kind study ranking the nutrition policies of Australia’s biggest supermarkets.

A new report launched this week by researchers at Deakin University’s Global Obesity Centre (GLOBE) has assessed the obesity prevention and nutrition related policies and commitments of the country’s big four supermarkets and found they could be doing much more to encourage healthy food purchases.

The Inside our Supermarkets report looked at Woolworths, Coles, Aldi and IGA. Highest ranked performer Woolworths scored 46 out of 100 on the policy scorecard, while the weakest performer was IGA with a score of just eight.

While the report identified some positive steps from supermarkets – including Coles and Woolworths’ commitment to roll-out the Federal Government’s Health Star Rating food labelling system across own-brand products, and in-store programs to promote healthy eating, such as Woolworths’ free fruit for kids – lead author Associate Professor Gary Sacks said supermarkets had a critical role to play in obesity prevention and could be doing much more to encourage healthy purchases.

Associate Professor Sacks advised “the vast majority of Australians buy most of their food at supermarkets, and the way these shops are set up can heavily influence what we buy.

“This power has only grown with the significant increase in sales of own-brand products in recent years, which has meant that supermarkets are now also our biggest food manufacturers.”

Inside our Supermarkets sets out three priorities for supermarkets to make a serious impact on population nutrition and obesity prevention.

• Commit to improve the nutritional value of own-brand products – set measurable targets and timelines for product reformulation to reduce sugar, salt and saturated fat content.
• Introduce healthy checkouts – remove confectionery and sugary drinks from displays near registers, and replace them with healthier options.
• Cut down on promotions for unhealthy food – commit to have fewer price discounts on unhealthy foods (such as chocolates and chips), and focus on improving affordability of healthier products.

The data compiled in the report was gathered from publicly available information (collected up to the end of 2017, as well as company policy information provided by company representatives. It was then assessed using the BIA-Obesity (‘Business Impact Assessment – Obesity and population nutrition’) tool developed by INFORMAS, a global network of public health researchers that monitors food environments worldwide.

Associate Professor Sacks said there were excellent examples from other countries of ways supermarkets could support customers to choose a healthier mix of products in their baskets.

He added “several UK supermarkets have committed to provide healthy checkouts, with no chocolates, soft drinks or lollies on display. Supermarkets in other countries also have a much higher proportion of healthy products featured in their weekly catalogues.

“This shows that there is a real opportunity for Australian supermarkets to follow suit and make a positive contribution to the health of our communities.

“Unhealthy diets and obesity are leading contributors to poor health in Australia. Tackling the issue requires a comprehensive societal response, including government policy and wide-scale action from the food industry, which includes our supermarkets.”

Click here to access Inside our Supermarkets: assessment of company policies and commitments related to obesity prevention and nutrition, Australia 2018