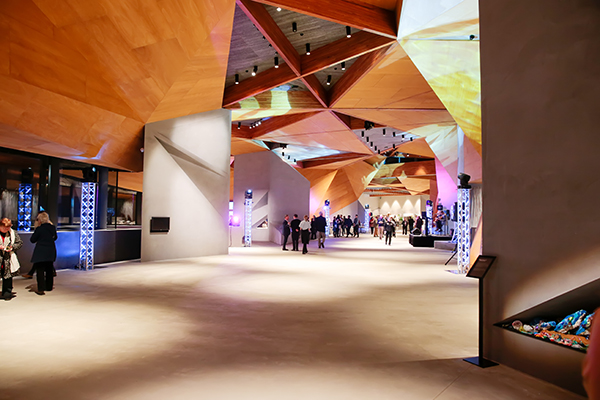 One of Victoria’s most popular tourism experiences, the Penguin Parade at Phillip Island has opened its new visitor centre designed by award-winning Terroir Architects.

Among the top 10 Victorian regions for tourism, Phillip Island contributed almost $500 million to the state’s economy last year and in 2016/17 the nature parks brought more than 740,000 visitors to the Penguin Parade and a total of 1.17 million visitors across all its paid attractions.

Opening the facility, Victorian Premier Daniel Andrews noted "the new centre will.. ensure this world-class centre continues providing a wonderful experience for more local families, and visitors from across Australia and the world.”

Now that the new centre is open, the old visitor centre, which was built in 1988, will be removed and the grounds restored to penguin habitat.

The new visitor centre is large enough to accommodate peak periods, when visitor numbers can reach up to 3000 people a day and offers a cafe and restaurant from where the penguins can be observed. 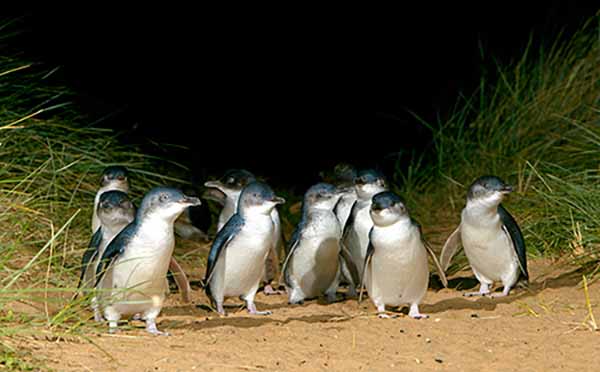 The Penguin Parade sits inside the Phillip Island Important Bird Area, which supports up to 32,000 Little Penguins. The 'parade' refers specifically to the penguins’ daily commute from the sea, up the beach to their burrows. More than 4,000 penguins are thought to burrow on Summerland Bay Beach.

The new centre offers fun and interactive activities for the whole family, including the interpretive habitat space which provides a ‘penguins-eye’ view of the world, complete with life-size grass tussocks and cinematic projections. There is a state-of-the-art theatre, a dedicated education wing, and a range of dining and retail options.

Australia’s largest colony of Little Penguins will benefit from a key aspect of the development with the restoration of more than six hectares of penguin habitat on the site of the old visitor centre and coach parking areas, creating homes for an additional 1,400 breeding penguins.

Victorian Energy and Climate Change Minister Lily D’Ambrosio also announced that the Penguin Parade visitor centre will eliminate all single-use plastics throughout its food outlets, building on the Victorian Government’s ongoing work to reduce the amount of plastic entering our waterways and environment. 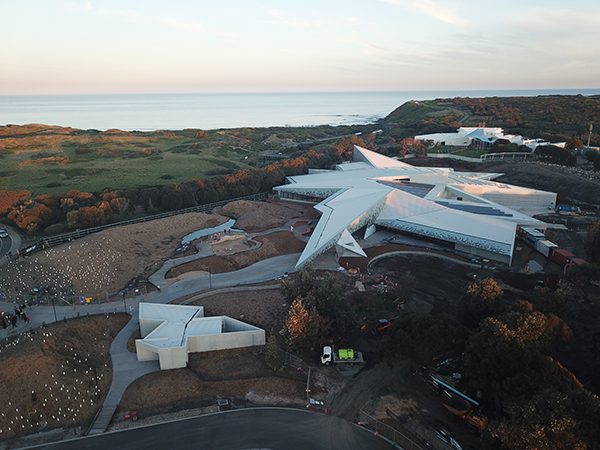 The centre’s overall environmental credentials are impressive, with an array of 666 solar panels on the expansive roof, a water filtration system to recycle rainwater for non-potable use, increased roof and floor insulation, and double-glazed windows. Low carbon building materials have been used throughout the centre’s construction, including sustainably sourced Victorian Ash hardwood for the impressive laminated beams.

The star-shaped building sits between three distinct landscapes on the Summerland Peninsula, the site of a historic buy-back scheme which saw an entire residential estate bought back and returned to wildlife habitat. The centre’s architectural inspiration and form combines elements of the Peninsula’s basalt bluff, coastal dunes and wetlands.

Its spectacular architectural design has already been acknowledged internationally, having just been announced as a winner at the 2019 International Architecture Awards, out of a field of over 380 submissions from 41 countries.

Terroir Architects principal and director Scott Balmforth said the design of the centre was “intended to visually embody the sense that the building is reaching out to the landscapes but also stitching the landscapes together.

“So rather than the building drawing attention to itself, it’s actually trying to create a sleeve within the landscapes around it.

“The sharp, angular form is also directly intended to, in a way, thin the building off. The form actually assists in creating a lighter appearance via the delineation between light and shade.” 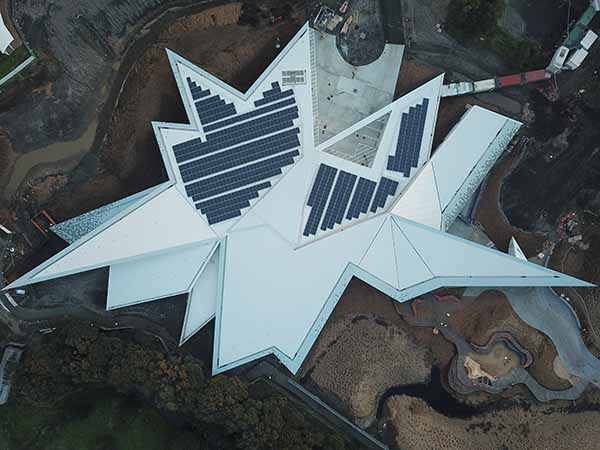 The centre’s design is open-plan with soaring ceilings and geometric timber panels, a sleek concrete and timber fit-out, and expansive windows looking onto penguin habitat and the boardwalks meets the nature parks’ ambitious sustainability goals.

Damian Prendergast, Phillip Island Nature Parks major projects manager stated "as well as ensuring the new centre is in the best place for the penguins, sustainability and innovation have been important guiding principles throughout the design and construction phase of this development as the Nature Parks strives towards achieving carbon, water and waste neutrality. This building will go a long way to helping us achieve that long-term goal.

“The new centre shows how far our understanding of wildlife and how to care for it has come, far from the first guided tours of the dunes in the 1920s, the overdevelopment of the Summerland Peninsula and the lack of physical protection provided for the birds and their habitat prior to the erection of the boardwalks and viewing platforms. The new centre puts first the more than 32,000 little penguins who call the peninsula their home, while also delivering an exceptional visitor experience.”

As well as the continued improvement of penguin habitat, a new 30-year conservation vision plan for the nature parks includes plans to conduct research on the impact of climate change on penguins, the ‘rewilding’ of the island through the reintroduction of native species such as the bush stone curlew and growling grass frog and the protection of marine environments.

Prendergast added “we are confident that this development will have ongoing benefits for Phillip Island’s penguins, our visitors and the community through the continued operation of this successful eco-tourism destination.”