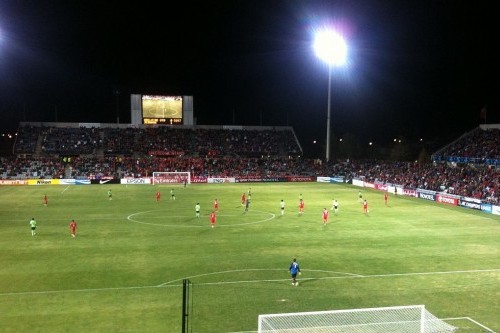 Since being handed back the license in May 2009, FFA has worked through a transitional ownership phase in preparing the club for continued success both on and off the park.

Following the completion of the signing of agreements, which took place this morning at Adelaide United’s Hindmarsh Stadium headquarters, the Gerard Consortium successfully took control of the Club’s 10-year license which runs until 2020.

FFA Chief Executive Ben Buckley said agreement was a great result for the people of Adelaide and a huge vote of confidence in the Hyundai A-League, stating “this move will see Adelaide United go from strength-to-strength and be transformed into a true community Club owned by local Adelaide business people.

“By putting the Club in the hands of a highly-respected, passionate and wholly local consortium led by Robert Gerard, FFA has ensured the success and the future of Adelaide United Football Club.

“FFA will continue to assist in the immediate short term to ensure the handover is smooth for the Club and its playing, coaching and backroom staff.

“Today is a fantastic day for the Club and the Adelaide community on mass as it delivers a team showing great results on the field being fully supported by a respected and committed community ownership group off the field.”

Adelaide United will undergo some immediate restructuring with Sam Ciccarello stepping aside from his position of Chief Executive that he has held since 2006 to work with FFA on a series of special projects.

Head of Hyundai A-League Lyall Gorman, praised Ciccarello for his contribution to the Club and went on to state that “despite some fairly tough times the Adelaide United brand and equity has never been stronger and that is testament to Sam and the management team.

“When any new ownership group comes in they are always inclined to install their own management and that decision is no reflection on the existing team at the Club.”

Incoming Chief Executive, Glenn Elliott, will take control of Adelaide United operations with immediate effect and work together with FFA and a group of consultants during the Club’s transitional ownership period.

New Chairman Greg Griffin said the consortium welcomed the opportunity to return the Club to the ownership of business people that work and live in South Australia, adding “we plan to add stability and sustainability to the Club and it will be run by people from the South Australian community for the community.”

The FFA and club owners have also re-affirmed their commitment to the strategic direction of the Hyundai A-League following a recent meeting.

Ben Buckley said the meeting was marked by a mutual recognition of the significant progress the Hyundai A-League has achieved and a collective approach to addressing the ongoing challenges and opportunities for the competition, stating “we consulted with each of the clubs in the lead up to the meeting. The meeting provided the forum for collective discussion and review of the strategic issues that had been identified. Coming out of the meeting is a range of options that we have all agreed are worth exploring as part of a strategic review process.”

The Review will include:

Buckley added, “we’re only five years into building this competition into a strong domestic league. We need to take stock of what has worked and what has not worked and if we need to a make changes to the model we should.

Speaking on behalf of the Hyundai A-League Clubs, Geoff Lord, Chairman of Melbourne Victory said that the Clubs were very pleased with the outcomes of the meeting and they were fully supportive of the FFA’s strategic direction and the review process that was in place, stating “the starting point is that we all recognise we have a fundamentally strong game. This season the excitement of the competition and quality of playing standard has been widely acclaimed as the best ever.

“We also represent the most popular global sport and the game that attracts the highest participation rates here at home. The challenge for us all is to build on that base to enhance clubs’ financial as well as on-field results."