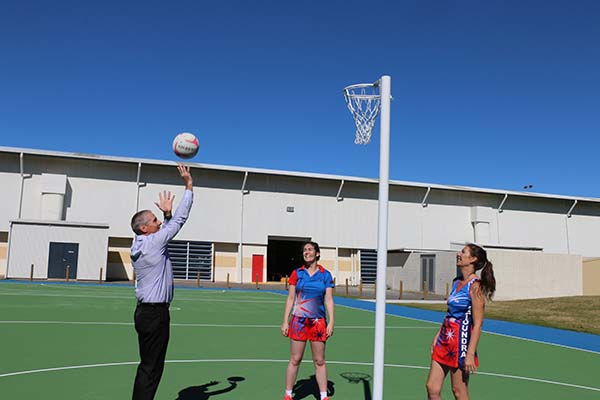 The recent opening of three new outdoor netball courts brings the total number of courts at the Caloundra Indoor Stadium precinct to 12 with eight outdoor and four indoor courts.

Caloundra District Netball Association has about 1350 registered players across its junior and senior ranks with junior numbers jumping from 880 last year to 930 this year.

The courts were built by Caloundra business NGP Contracting thanks to $250,000 in council’s capital works funding and $130,000 from Division 2 councillor and Deputy Mayor, Tim Dwyer’s divisional fund.

Councillor Dwyer advised: “With the development of Aura and growth across Caloundra generally as well as the success of Sunshine Coast Lightning, we expect numbers, particularly in the district’s junior ranks, will only continue to grow.

“These new courts give capacity to introduce new teams into our fixtures and mean more people – young and old – can enjoy the health and social benefits of playing this wonderful team sport.

Councillor Dwyer noted a basketball backboard and hoop had also been installed beside one of the new courts to get even more people involved in sport.

Councillor Dwyer added that high-quality sports facilities helped build stronger communities and this was particularly important in major growth areas like Caloundra: “Our healthy, smart, creative region is built on the foundations of sporting and other community organisations which encourage active lifestyles and the opportunity to really feel a sense of belonging in the area you call home – I know these new facilities will help Caloundra District Netball Association thrive.”

Caloundra District Netball Association president Monica Jones said the association was thrilled with the upgrade and said having additional courts would enable increased participation and allow the Association to host representative carnivals.

Jones commented: “We have already been able to expand our annual club carnival which attracts club across South East Queensland and beyond. We haven’t had to turn teams away this year as we have in the past.”

She said the new courts also meant there would now be ample courts for representative and club teams to train at their home precinct.