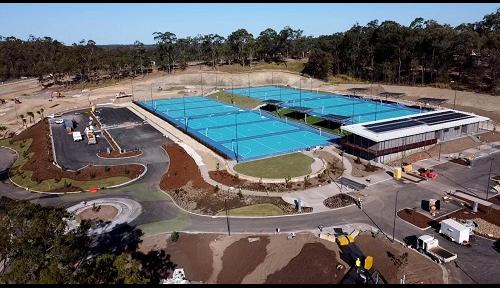 The City of Gold Coast’s largest community infrastructure project - the $80 million Pimpama Sports Hub – has seen its netball centre be the first of the facilities to reach completion.

The first facilities completed as stage one of the Pimpama Sports Hub include the world-class netball centre, a clubhouse and an event space for 3,000 patrons.

The Pimpama Sports Hub will service the growing northern Gold Coast population and contribute $161 million to the economy.

The netball centre has twelve courts and has been surfaced with an Australian made high performance acrylic cushion by local company Grassports.

The acrylic cushion system used to surface the netball courts is the same system used on the US Open tennis courts.

The multi-layered system features a hard wearing and long lasting slip resistant surface, and is a cooler temperature than concrete courts.

Gold Coast Mayor Tom Tate advised “Pimpama currently has the highest number of netball player registrations on the Gold Coast, so we know this facility will be well-used and well-loved.

“I am excited to also announce that the centre will be leased to Netball Queensland, and a new regional netball competition will be established.

“Once complete, 750,000 people are expected to pass through the hub each year.”

The netball courts occupy almost one hectare and with a one hectare community park are expected to open to the public by the end of the year.

Stage two of the hub features an aquatic and community centre with fitness facilities, an eight-court tennis centre and a one kilometre walking trail, and is expected to be completed late 2021.

The hub will be Australia’s first, 100%, energy-self-sufficient sporting facility, achieved through a combination of solar power, battery storage and co-generation systems.

A total of 275 solar panels have been installed on the netball clubhouse and court shade structures, which will generate around 12% of the sporting hub’s total power.

Pimpama Sports Hub is being built on a 14 hectare site on the corner of Rifle Range and Bull Roads.