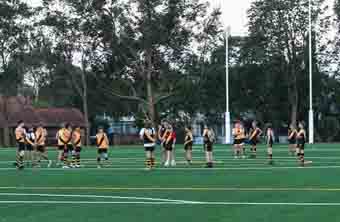 In a unique partnership between the NSW Department of Education, AFL NSW-ACT and Pittwater Council, Sydney's Northern Beaches now has two new multipurpose sportsfields. Located at Narrabeen Sports High School, the main field features a FieldTurf Revolution™ 3 all-weather synthetic surface while a grass area on the western side of the school grounds, which had previously fallen into disuse, has now been upgraded and re-turfed.

Under the partnership agreement, the school will use both fields during term time while community sporting groups will be able to use them outside school hours for training and games.

Also contributing to the project is AFL NSW-ACT, which will use the main field during the winter season for AFL training and games. The fields are also suitable for sports such as touch football, football, rugby union and rugby league, with both having floodlighting installed to allow night games and training to take place.

Pittwater Mayor Jacqui Townsend said that the agreement had delivered two much-needed sportsfields ahead of time and within budget, stating "it shows the value of the Council working cooperatively with other organisations to achieve real results for the Pittwater community."

AFL NSW-ACT General Manager Tom Harley said partnering with the Council and the NSW Department of Education had increased opportunities for both the students and local communities to use a first class sporting facility.

Harley explained "AFL in NSW has had its biggest year of participation to date and we're committed to providing excellent infrastructure for communities to participate in Australian football.

"We value the opportunity to collaborate with schools and local governments through partnerships like this to deliver an innovative sportsfield solution."

For project managers Turf One, the project brief presented unique challenges in that the school is located on a flood plain and is historically subject to inundation, albeit at twenty year intervals. Increasing finished surface levels to avert this risk was not an option, due to regulatory constraints on building within the flood plain. There was also a requirement for the design and construction of a water harvesting system that would provide water for the irrigation of a natural grass oval at the school. And finally the playing surface was required to meet the exacting requirements of both the AFL and FIFA in order to receive certification from the two governing bodies.

Turf One through its association with FieldTurf and its previous experience in the construction of fields on difficult sites was able to satisfy Council as to its ability to rise to these challenges.

The FieldTurf Revolution™ 3 synthetic surface with cryogenically ground rubber infill that was installed has been certified as meeting all testing requirements of the AFL, FIFA (1 Star) and the IRB (for rugby), including Critical Fall Height ≧ 1.3 metres without the need for an underlying shock pad. It is the first surface of this type to be installed in Australia.

As with the football pitch that Turf One constructed for Warringah Council at nearby Cromer Park the playing field at Narrabeen Sports High School includes design features that will raise the bar for synthetic fields in Australia, including a porous base with water harvesting facility and the latest development in football surfacing. 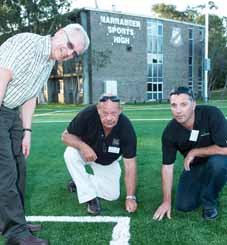 In another breakthrough for sustainability, captured rainwater from the synthetic surface of the main field will be pumped into storage tanks and from there used to irrigate the smaller field.

Local schools other than Narrabeen Sports High will be charged $30 an hour, and schools from outside the council area $50 an hour.

The council estimates that the field will be hired for about 30 hours a week, outside of school hours.

A sinking fund will be established to cover the cost of replacing the field in eight to 10 years.