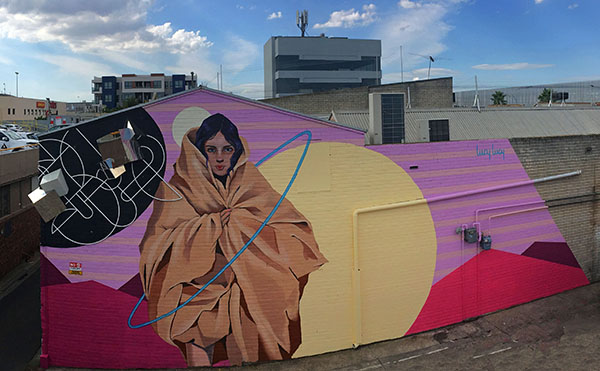 Australia’s new festival of urban art, Can’t Do Tomorrow, has unveiled its first line up of artists, major installations and programming set to take over The Facility, Kensington in Melbourne for ten days this summer from 20th to 29th February 2020.

Can’t Do Tomorrow will transform Melbourne’s underground warehouse into an outlandish Eden celebrating the best in urban art and contemporary culture.

Over 100 street artists, galleries, musicians and collectives will revolutionise the multi-level venue, from top to bottom, presenting site-specific works across every surface ranging from paintings, murals, photography, sculptures and illustrations, to projections and epic installations.

Can’t Do Tomorrow, Festival Director, Zoe Paulsen notes: “Can’t Do Tomorrow is a one of a kind summer festival which both figuratively and literally, breaks through the walls of a traditional art fair. We want to create an epic experience for our visitors, and immerse them in a new way of consuming, or being consumed by art.”

A selection of the biggest names in the underground urban arts scene will transform the space with awe-inspiring installations and site-specific murals.

The first major artworks and programming revealed include:

• Artist and finalist for 2012 Archibald Prize Michael Peck will float a full scale, hand painted sailboat in a temporary pool created from a shipping container. As the centrepiece artwork of the festival, visitors will be able to physically interact with the installation by contributing to its form with their own inscriptions.

• New media artist and projection illusionist Nick Azidis will present a new work created in response to the building, which will take over the exterior walls and tunnel entry of the venue.

• To celebrate LGBTQI identity and culture, street artist Kaff-eine will create Infinite Thanks, a collection of small paintings with detailed images and written stories called ‘ex votos’, dedicated to LGBTQI icons, communities and personalities (rainbow deities). The paintings will be displayed inside a purpose-built shrine on the Warehouse level. Alongside this, Kaff-eine will be running a series of free and relaxed ‘ex voto’ workshops throughout the festival where visitors are encouraged to bring a small offering to add to the shrine.

• Taking inspiration from all of the 80s classic movie tropes of the “shady warehouse district” filled with unruly gangs unloading stolen vcrs and sketchy mob bosses making deals, Callum Preston will be building a new installation drawing on the concept "off the back of a truck." Visitors will feel like they've just stepped into a movie or cartoon as they are invited to wander through, touch and experience this new work.

• UK born urban contemporary artist Mysterious Al, who rose to fame in the early 2000’s London through the explosion of street art, will completely transform an area within the venue with a new piece unlike anything he’s done before. Reflective of his paintings, the piece will have two sides, inviting visitors to look closer, beyond the beauty and behind the mask, to reveal hidden secrets within.

Running alongside the artworks, the 10 day festival will also include an extensive program of talks delving into the inner workings of the street art scene and intricate subcultures within the graffiti writing world. A stellar line-up of panel discussions, interviews and debates will be held with prominent artists, collectors, critics and activists.

Closing the talks program, renowned street artist Rone will be in conversation with high profile collector and developer Len Warson in the special event Patron of the Streets on Saturday 29th February, exploring the relationship between patron and artist, and the acclaimed Omega and Alpha projects.

Visitors will also be able to purchase original artworks presented directly from artists and galleries, as well as limited edition prints available from a custom built print store.

A curated music lineup, live acts, DJs and artist-led workshops will run throughout the festival alongside pop bars, food and exclusive warehouse club nights. The brand new Tallows club open until 1am keeps the festival vibe going into the night, where party-goers can gather and unwind after a day full of immersive art.

For more information go to cantdotomorrow.com, with the full program to be announced in January 2020.