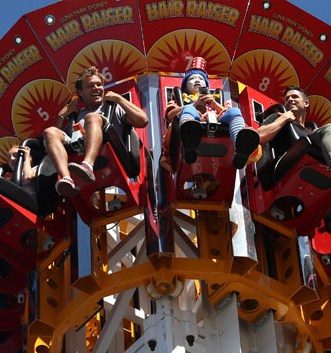 Luna Park Sydney has unveiled the 'Hair Raiser' drop tower ride, the first permanent attraction to be added to the heritage amusement park since its grand re-opening in 2004.

Changing the skyline of Luna Park Sydney's harbourside location, the 50 metre high tower is the tallest and fastest ride in the park.

Launched on Boxing Day, the Hair Raiser has already become the epicentre of their historic and famous portfolio of rides and amusements that have been an integral part of Sydney for nearly 80 years.

Riders on the Hair Raiser are raised up the tower for a bird's eye view of Sydney city before being dropped at a speed of 80 kilometres per hour in less than a second.

The addition of the Hair Raiser to the Luna Park portfolio of entertainment and attractions has been a highlight of the Park's summer which has also seen it host a New Year's Eve Harbour Party along with plans for special celebrations on Australia Day.

In addition to the new permanent attraction, Luna Park Sydney is also continuing its school holiday tradition of introducing several additional attractions including 'Freak Out', a sensational thrill ride experience that swings its riders up to 120 degrees while 21 meters in the air.