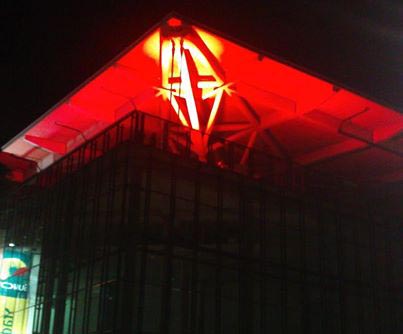 A new state-of-the-art lighting system is now able to illuminate Brisbane's Suncorp Stadium in a range of hues - consistent with the colours of teams and codes playing at the venue.

The landmark Stadium can now be lit in any colour or combination of colours, with lighting switched between strobe, flash or still at the press of a button.

Flicking the switch prior to the first use of the system, Queensland Sports Minister Steve Dickson stated "the new lighting will draw attention to sport (and) kids will now see their sporting heroes up in lights on the field."

The project has been undertaken as part of the Stadium enhancement program aimed at providing teams greater ownership of the venue on game day with the lighting will be switched on during the nights leading up to major events like State of Origin, to create game day buzz and excitement as patrons arrive at local games, or to support colours promoting community initiatives.

Graham explained "stadium management works very closely with its hirers on how we can create extra value to their events.

"Customised branding through this lighting is a result of that close relationship.

"The lighting we've installed makes it convenient and cost-effective to changeover between games for the multitude of hirers that use the Stadium.

"Lighting has been used with great success at places such as MetLife Stadium in New York, which is home to both the New York Jets and New York Giants, and that's what will now see at Suncorp Stadium."

For more information go to www.suncorpstadium.com.au