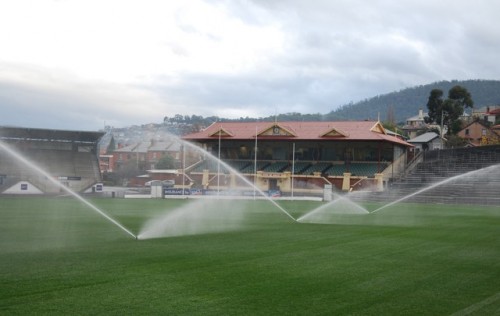 Hobart City Council’s ongoing upgrades at the North Hobart Oval, which saw a new grandstand opened at the end of last year, has seen the introduction of high performance surface to meet the modern requirements of AFL.

Since 2009, the Council has set about the upgrading of the historic venue, introducing new floodlighting and undertaking the building of steel-framed grandstand and changerooms after the ground’s George Miller Stand was devastated by fire in 2012.

Mindful of an increase in ground closures, that the Oval's surface was not meeting the evolving requirements of modern-day sport and rising user expectations regarding the quality of the playing surface, the Council moved to reconstruct the venue's playing surface to offer a high performance, sand-based field that could handle all types of inclement weather.

North Hobart Oval is in a central residential suburb of Hobart with the site first being used as the Hobart Town Brickfields in 1844 before becoming a convict women's housing site, an immigration depot, and a facility for invalids, before eventually closing in 1882. At this time the land became a rubbish dump until it was acquired for the construction of sporting stadium in 1921.

The first official match at the new stadium took place on 6th May 1922.

The gorund has long been used for AFL during the winter months, and due to the previously poor drainage system, required significant renovation at the end of each season, meaning it was not used for much of the summer months.

As well as providing a surface for AFL, the Council’s reconstruction project was developed to encourage other codes of sport to this wonderful venue.

The Council awarded the works to a local ground construction company, Total Turf Care, in 2013, who installed the drainage, irrigation and all-profile works to Council specifications. Total Turf Care also enlisted designer David Hughes from Water Dynamics to provide an irrigation plan that incorporated the need for water efficiency, to meet the challenges arising from the increasing cost of providing water for irrigation.

Components of the new irrigation system include Hunter Industries' I40 stainless steel rotors, ICV solenoid irrigation control valves (fitted with Accu-Sync for pressure regulation to prevent misting and overspray), ACC decoder controller (reporting to IMMS central control) and a Hunter ET Weather Station. The I40 rotors have a range of up to 23.2 metres and precipitation rates of about 15mm/hour. The ACC decoder controller reports to a Hunter Irrigation Management and Monitoring software (IMMS) Central control. The IMMS is a PC-based software package. 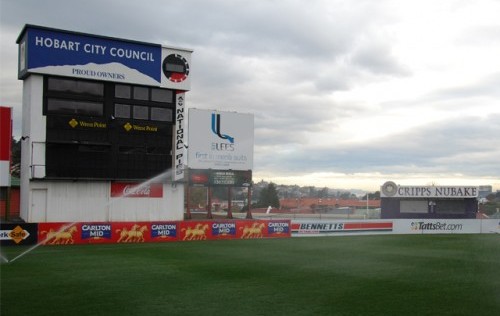 A key component of the project was to provide the ability for Council staff to retrieve as much data back through reporting from IMMS water usage and the ET station picking up the micro climate at the stadium, to monitor the sustainability of the oval.

According to the Council, the result of the project was an efficient system that had exceeded all expectations regarding water savings and data outputs. There was also increased flexibility to inject fertilisers into the irrigation system, which minimised machinery impacting the surface and saved on resources, time and money.

It was expected that ground closures would be reduced as a result of the project and user experience would be improved.

Feedback from users to date had been overwhelmingly positive.

Click here to contact Hunter Industries and to find out more about their irrigation range via their entry in the Australasian Leisure Management Supplier Directory.

Images: Irrigation of the upgraded surface at the North Hobart Oval. Courtesy of Hunter Industries.