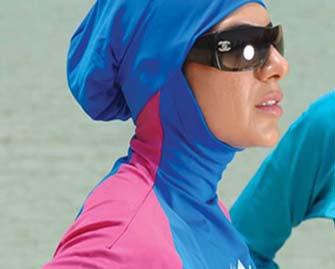 An Australian swimming teacher has invented a new headscarf for Muslim women that could be a great benefit to migrants in aquatic environments.

Australian Lifesaving organisations have previously highlighted that recently arrived migrants have a much higher risk of drowning, and are trying to encourage more people from different cultural backgrounds to participate in water education programs.

"So I thought there's got to be something a little bit better out there."

With the help of a local swimwear company, and several prototypes later, Fisher has invented what she calls a 'uniscarf'.

Made out of a quick-dry fabric, it looks similar to a hijab, fits tightly around the neck and the bottom, and can be tucked easily into the neck of a rashvest, or t-shirt, so the material can't get caught on anything or get in the away of breathing.

Katherine Georgiou, the coordinator of Life Saving Victoria, says anything that encourages more participation and education for cultural groups in swimming is important.

"The more practice that is gained in these areas, and certainly swimming and lifesaving skills, women look after children and for them to have the ability and skills and to perhaps one day perform a rescue could be just the thing that could save another life," she said.

The headscarf is not the first piece of exercise wear designed for Muslim women in Australia. Sydney-based Lebanese-Australian designer Aheda Zanetti created the Burqini - a full length swim suit with a hood, also designed to preserve the modesty of Muslim women - which is sold through under the Ahiida brand.