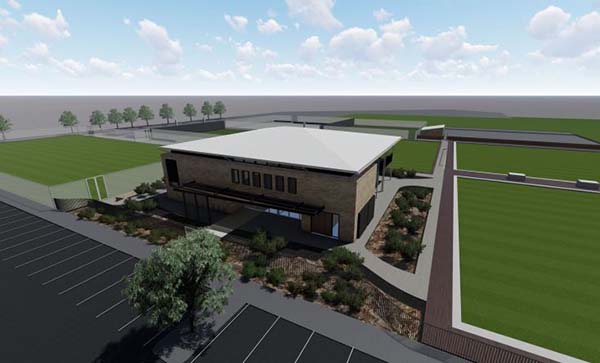 Representatives of the clubs soon to be moving in to the new sport and community centre at Fremantle Park are thrilled with its progress.

The Fremantle Park Sport and Community Centre is being built by McCorkell Constructions and will be home for the Fremantle Workers Social and Leisure Club, Fremantle Lawn Tennis Club and Fremantle Bowling Club.

Construction on the new facility has been progressing rapidly, with completion expected before the end of the year.

Tennis Club President and Fremantle Park Sport and Community Centre Chair Lawrence Apps said he couldn’t wait to be sitting on the balcony sipping a drink and taking in the view.

“The views are fantastic and the patrons, members of our clubs and visitors, are just going to love being up here looking out over the magnificent Fremantle Park.”

As the project required the demolition of the old bowling club and tennis club buildings, Bowling Club President Keith Bowden said he had mixed emotions when the old bowling club was demolished last month: “It’s a little bit sad but we need to move on. It was a 61-year-old building and it was showing its age in terms of its facilities, so it’s great having something new and all the members are happy about it.

“With the views out onto the playing areas and a great new building it’s going to be great for the Fremantle Bowling Club.”

Workers Club President and Fremantle Park Deputy Chair Don Whittington said it was a big decision for the club to move out of its old home, but it was clear they’d made the right choice.

“I’m just so excited about getting in here, particularly for our members who’ve had to put up with a lot over the past five years,” Mr Whittington said.

The approved budget for the project is $4.1 million, with $1.85 million coming from the City of Fremantle, $1.85 million from the Fremantle Workers Social and Leisure Club and $400,000 from the state government’s Community Sport and Recreation Facility Fund.

On top of this, Fremantle Workers Social and Leisure Club have contributed another $120,000 and the tennis and bowling clubs have added $30,000 each to include additional features that were outside the original scope of works.

The City of Fremantle will build a new public car park on the Parry Street side of the facility once the building works are complete.