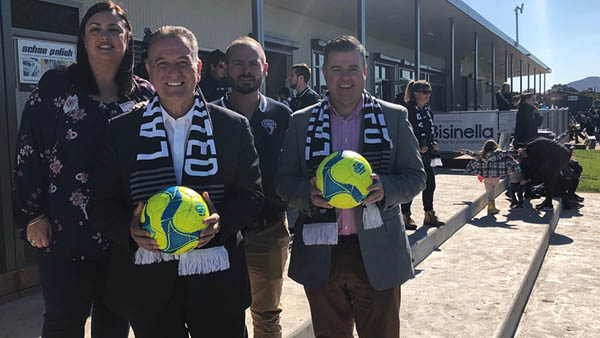 Lara United is a growing community club with more than 260 active players from miniroo to senior level, with around 40% of these players being female.

Through a partnership with Leisure Networks, Lara United is also making a positive impact in the community by improving access to soccer for people of all abilities.

Geelong Mayor Bruce Harwood noted "the impact of strong grassroots sporting clubs on the overall health and wellbeing of our local communities can’t be undersold.

“With these facilities, Lara United now has a better chance of attracting junior girls to the sport and developing them all the way through to senior level, where hopefully some will go on to even bigger things.”

Councillor Kylie Grzybek added “the council was proud to make a major investment in these new facilities that will help Lara United become an even better place to play and socialise, especially for girls and women.

“The club had been finding it impossible to fit everyone in, with some teams having to change in the car park. They now have enough space for two matches to be played at the same time, with girls and boys able to play side-by-side and change separately in modern, comfortable facilities.

“We thank the state government for its investment in the 'Change Our Game' project delivering female-friendly built environments and equitable facility usage policies, in particular in Lara through its funding contribution for this project.”