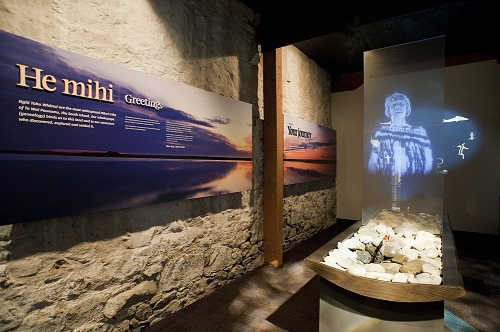 Te Ana Ngai Tahu Rock Art Centre, an interactive tourism attraction housing the largest and most significant collection of Maorirock art in the world, will be officially opened at a special ceremony to be held in Timaru this Friday (10th December).

The event to be attended by some 200 invited guests including NgaiTahu Kaiwhakahaere Mark Solomon, Sir Tipene O'Regan, the local mayors and members of parliament, will begin with a blessing at 11.30am.

As NgaiTahu Kaiwhakahaere, Mark Solomon explains "the centre is hugely significant for NgaiTahu. It is the culmination of years of hard work and devotion to protecting and preserving this important cultural and historical toanga for the iwi and now we have the perfect showcase for sharing it with the world."

The art of visual story telling through rock drawing is one of the oldest recorded art forms, dating back as far as 40,000 years in some countries. The South Island of New Zealand and in particular the Aoraki region is well known for its historic rock art sites with more than 500 sites recorded within the tribal boundaries of Ngai Tahu. Maorirock art paint was made from animal or bird fat mixed with vegetable gum and soot or kokowai (red ochre) to make black or red paint and was believed to have the qualities required for lasting the test of time.

NgaiTahu Rock Art Trust Curator Amanda Symon adds "Te Ana will offer a genuine cultural interpretation of the rock art from this region. Visitors will be taken on a unique journey through the rich cultural history of NgaiTahu via interactive multi sensory displays supported/hosted by our especially trained local guides.

"We are pretty excited about what the future holds. With growing interest internationally in rock art and a significant rise in cultural tourism we are projecting that Te Ana is likely to attract up to 34,000 visitors each year.

"That's a huge boost in terms of the protection of the rock art - as all profits from Te Ana will be used for that purpose - but also for the South Canterbury economy, and as a great source of employment for the locals."

For more information go to www.teana.co.nz/