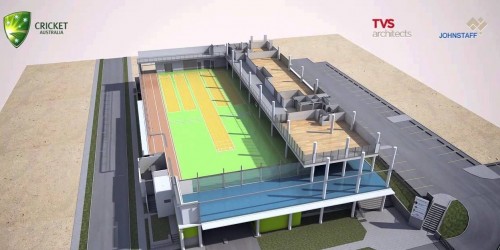 Construction of Cricket Australia's new Centre of Excellence in Brisbane is nearing completion and will soon be the new home for high performance cricket.

Federal Minister for Sport Kate Lundy recently toured the facility at Allan Border Field in the suburb of Albion with its Senior Manager Belinda Clark and several Australian cricketers.

Senator Lundy said it was a fantastic opportunity to tour the site and inspect the current construction of the Centre built with the support of $17.5 million from the Australian Government.

Senator Lundy explained "this will be a fantastic home for high performance cricket in the very near future.

"Queensland is home to many of our greatest cricketers, so it seems fitting that not only our current team, but also those coming up through development pathways, will hone their skills in Brisbane.

Senator Lundy said construction of the centre began in December 2012 and is expected to be completed in October this year.

She concluded "the new facility will include a state-of-the-art athlete development centre integrating science, technology and coaching to enhance both the development and performance of our cricketers."