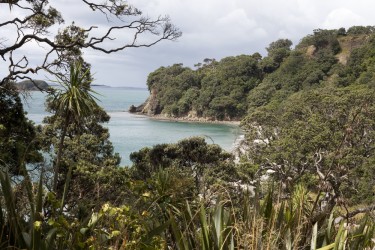 The Auckland Regional Council (ARC) has purchased its final regional park, Te Muri Regional Park. Fittingly, it is the neighbour to the first regional park that ARC purchased, at Wenderholm in 1965.

The new block at Te Muri on the Mahurangi coast has a boundary on the northern side of the Puhoi River and is only 30 minutes from Auckland's CBD. It backs onto Te Muri Beach, a 1 kilometre sandy beach already owned by the ARC, and will be named Te Muri Regional Park.

At 407 hectares, it is the largest park purchase since the Auckland Regional Authority (ARA) purchased 588 hectare Tawharanui Regional Park in 1973 and the largest addition to the regional parks network since the gifting of Atiu Creek Regional Park (843 hectares) by Pierre and Jackie Chatelanat in 2006.

"This network has taken 47 years to create and this final purchase is the finishing touch to a masterpiece.”

Chair of the ARC Parks and Heritage Committee Sandra Coney says this was a critical purchase to protect the landscape of the Puhoi River, Wenderholm Regional Park and the wider area, stating “the purchase protects the wonderful vista of the estuary and of Wenderholm The whole stretch of coast from Mahurangi to Waiwera is now protected in a natural state for all time. Plus Te Muri is stunning land in its own right.”

The property was purchased under the Public Works Act and in agreement with the estate of Peter Schischka. It is intended that some of natural areas of the property will be named to honour Peter Schischka's family who have farmed in the district since 1885.

The property had been on the ARC's acquisition plan for some years, and according to Rodney representative Cr Christine Rose, meets some critical recreational needs for the growing region, stating “this park is highly accessible, being only 30 minutes from the city centre It is huge, so provides ample space for the growing numbers of people wanting to ride horses or mountain bike, as well as those wishing to swim, walk or picnic.”

The property adjoins Te Muri River and Mahurangi Regional Park (Sullivans Bay, Mahurangi West) to the north. The beachfront at Te Muri was acquired from the Schischka family in 1973 but was only accessible by walking through an estuary at low tide.

The property will provide expanded camping opportunities and there will be a rentable bach. It will continue to be a working farm.

The ARC has added 1,794 hectares of parkland to the regional parks network since 2004. This includes 12.18 kilometres of coastline and is made up of:

On 1st November 2010, a new Auckland Council will come into existence replacing the current eight councils in the Auckland region.

For more information go to www.aucklandcouncil.govt.nz/EN/Pages/default.aspx