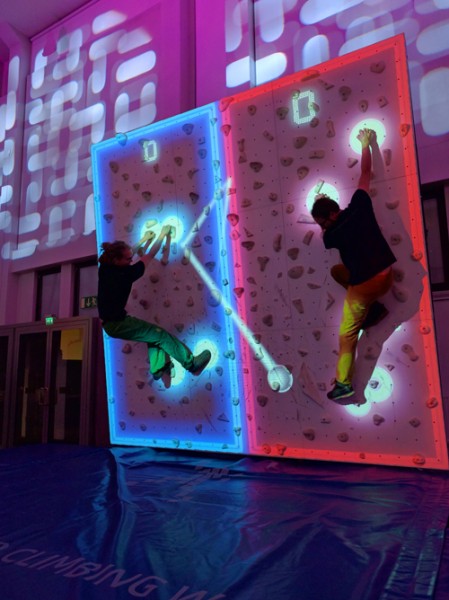 The Augmented Climbing Wall is a small wall, ideal for audience participation, that offers venue marketing through the online live scoring opportunities while also serving as a billboard space for advertising.

Witth interactive graphics and games maximise the capacity of any wall, the Augmented Climbing Wall offers hundreds of distinct routes and games that create new fun challenges for climbers.

The highly visual wall is also entertaining to spectators and can be used for displaying logos and advertisements.

Augmented Problems
The Augmented Problems application allows for an unlimited amount of routes on the same wall. Climbers can create their own routes suitable for their skill level and body type/length by using the touch screen. Routes can be saved and shares to other climbers.

The application also includes a video feedback system packed with features for climbers and trainers alike. Videos can be shown either on the touchscreen or life-size on the wall. They can be overlaid, synched, zoomed and scrubbed for accurate comparison of climbing technique.

Whack-A-Bat
Whack-A-Bat provides fun experiences for both new and experienced climbers and also entertains the audience.

As the game gets faster and more difficult the audience gets engaged and starts yelling instructions. While primarily a one-player game, we’ve seen that kids often love playing it together with friends.

Climball
Combining the best of pinball, air hockey and climbing, Climball is the only two-player ballgame that can be played by climbing.

Climball has two basic modes: competitive and collaborative. In competitive mode players score points by getting the ball past their opponent to the opposite wall while in collaborative mode they try to keep the ball in the middle of the wall for as long as possible.

For more information click here to contact The Highgate Group via their entry in the Australasian Leisure Management Supplier Directory.

The Highgate Group and the rise of sport climbing are featured in the May/June 2017 issue of Australasian Leisure Management.