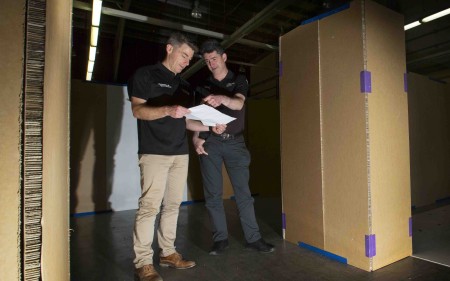 Considering a range of potential features for Christchurch’s new Metro Sports facility, its design and operations team recently constructed a mock-up of the new aquatic sensory room and changing rooms planned for the venue, inviting a group of potential users to test out the environment.

Christchurch City Council Establishment Manager for Metro Sports Steve Gibling explained “the idea was to get some people moving through the space and telling us what they thought.

“Did the design work for them? Is the equipment right? Is the layout working?

“We had our operations team watching and looking at how to make the space work better.”

Gibling said testing the spaces had been incredibly helpful to the design process and also pointed to the ways in which the space could operate with users at the centre of our thinking, advising “we don’t often get to do that detailed assessment. It was great to listen and to get feedback from the end users.”

The new aquatic sensory room would feature a closed off pool area where users could control their environment - from how the water worked in the pool with a range of jets and sprays, to the lighting and the noise levels.

Gibling added “for people who find pools and water spaces challenging, it’s going to be a safe, controlled environment to have an aquatic experience.

“It will act as a pathway for people to get the confidence to make their way into using the main leisure pool or just to stay in this space and have an experience they can’t get anywhere else in the country.”

Erin Tennent, Metro Sports Facility Project Director, for builder Ōtākaro Limited said the facility will be the largest sport and recreation venue of its kind in New Zealand when it opens in 2020.

Tennent explained “it’s a rare opportunity, so we want to make sure this is an inclusive facility where as many people as possible feel like they have an opportunity to participate.

“There is nothing like this aquatic sensory area in New Zealand and even international examples are hard to come by.

“We want to create a space that helps users with disabilities build their confidence around water and perhaps in time feel comfortable enough to go and explore the leisure water area and other pools in the Metro Sports Facility.”

Canterbury District Health Board, which owns the Design Lab and has used it for testing out future hospital facilities in Christchurch, said the opportunity to mock-up the new aquatic sensory room showed the value of the Design Lab.

A spokesperson for the Health Board advised “this is the place where ideas come to life and are tested and refined to see how they perform in 'real life' situations.”

Construction of the Metro Sports Facility, jointly funded by the New Zealand Government and Christchurch City Council, is currently underway.