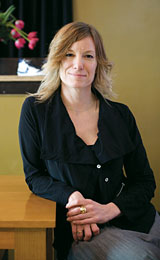 Minister Davies stated “in 2009, she became the Executive Director of Leadership Victoria and has led the organisation through the development and implementation of its strategic plan, new programs and has driven the innovation agenda of the organisation.”

She has been a member of VicHealth’s board for six years.

Rechter has a degree in education, dance and theatre, and a masters in business leadership. Her many awards include Tasmania Day Award, Winston Churchill Memorial Trust Fellow, Harvard Club of Australia Fellow, Australia Council Fellow and a Centenary Medal.

Prior to taking up her role at Leadership Victoria, Ms Rechter was Chief Executive of Footscray Community Arts Centre. This followed her work in various positions including Artistic Associate for the Melbourne International Arts Festival, and CEO/ Founder of Stompin Youth Dance Company. She has also evidenced her commitment to and interest in VicHealth through over six years as a member of its board.

Rechter will take up her role in October.