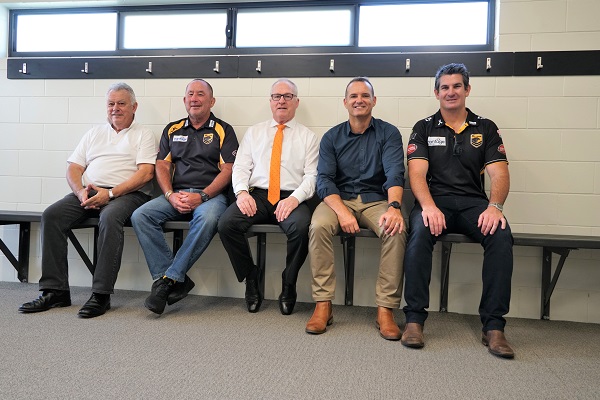 Some of the Sunshine Coast’s most popular sport stars have a new and improved space to prepare for games and sharpen their skills.

The Falcons, who compete in the Queensland Intrust Super Cup and finished top of the ladder at the end of the 2019 Home and Away Rounds, will use the facility as their training, treatment and education headquarters.

“Sunshine Coast Stadium plays host to numerous teams from other sporting codes throughout the year who I’m sure will also appreciate this new facility, which includes an accessible, unisex public toilet to help with event management.

“The new $550,000 change rooms were funded by council and the Queensland Government’s Queensland Footy Facilities Fund.

“Council is proud to work closely with our partner organisations to provide new facilities that help our local sporting teams develop and grow.”

Sunshine Coast Councillor Peter Cox said the new change rooms would help provide a better environment to nurture and support the next generation of rugby league players, adding “with the Falcons being a feeder club to the Melbourne Storm, improved amenities help give young players the best possible start to their careers.

“Rugby league is hugely popular here on the Sunshine Coast and it’s great that our top-level players will have facilities in line with competition standards.”

Council continues to invest in this facility, which in turn supports our objective for the Sunshine Coast to be Australia’s most sustainable region: healthy, smart, creative.

Falcons Chief Executive Chris Flannery said the club would like to thank the Sunshine Coast Council and the Queensland Government’s Footy Facilities Fund for their vision and support of these vital new change rooms.

“With our Intrust Super Cup Falcons team Minor Premiers this year and our U20s Falcons winning the state-wide grand final at the weekend, it’s fantastic to know that when they return for pre-season training in November, they will have these high quality change rooms to operate out of and prepare for our 2020 campaigns.”