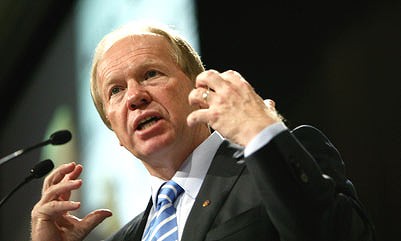 Newly appointed Australian Rugby League Commission (ARLC) Chairman Peter Beattie says he will again push for constitutional reform within a year, after three clubs voted against making immediate changes to the board.

The Melbourne Storm, Gold Coast Titans and Canterbury Bulldogs turned down the proposed changes, which were set to hand the clubs and state bodies spots on an expanded ARLC board for the first time.

15 of the 16 NRL clubs and the NSW and Queensland state bodies needed to approve the proposed reforms if they were to go ahead.

Instead of the proposed 10 seats, which would have included representatives from the New South Wales Rugby League (NSWRL) and Queensland Rugby League (QRL), the commission will stay at eight.

Former Queensland Premier Beattie, who took on the Commission’s Chairmanship last month, said he would continue to work with clubs and would return to discuss these changes again in the future.

Beattie told the ABC “we're not dealing with wimps here; we are dealing with intelligent people who have a strong passion for the game.

"Obviously there were some disagreements about the advancement of constitutional reform. It was a 15-3 vote but the feeling in the room was a positive one.

"You can disagree without it being an ugly fight, and it wasn't … of course there was some disappointment but it was done with good will.

"We will revisit constitutional reform within a year. I have taken responsibility for initiating some of those discussions, so it's not dead."

Beattie praised the addition of V'landys and Laing to the Commission, noting that both added "enormous" value to the commission, and they could potentially succeed him in the future.

He added “the other advantage out of today is this - because they are both appointed as independents, they can at a future occasion, I am not going anywhere just yet - they can be chairs.

"What a great position for rugby league to be in. We have two people who could be a future chair of the commission."