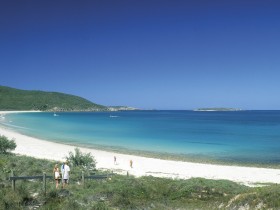 A proposed $600 million resort near Yeppoon has moved to the next stage after the Queensland's Coordinator-General released the final terms of reference for the project's environmental impact statement (EIS).

Queensland Deputy Premier, Minister for State Development, Infrastructure and Planning Jeff Seeney believes that the potential project was an exciting tourism venture that could create more than 20,000 jobs.

Minister Seeney stated "the proponent, Iwasaki Sangyo Co, aims to construct a new 300-room, 5-star resort with fine dining and recreational facilities on the southern side of its existing Mercure Capricorn Resort.

"The terms of reference for the project's EIS have now been finalised and will ensure a range of potential environmental impacts, especially any impacts on sensitive areas like Corio Bay and Byfield National Park, will be robustly examined."

The existing Mecure Capricorn Resort is already one of the largest employers in the region and if approved, this new resort is expected to create further local employment opportunities.

The finalised terms of reference for the EIS are available at