Brisbane is set to get a new live entertainment venue in Fortitude Valley’s Brunswick Street Mall with space for up to 3,300 people.

The $40 million project is set to fill a gap in the market for a mid-sized live music venue, according to its high-profile music industry backers.

The venture is being undertaken by the owner-operators of live music venue The Triffid in Newstead, including former Powderfinger member John Collins, Paul Piticco from Secret Sounds Group which operates Falls Festival and Splendour in the Grass and Hutchinson Builders’ Scott Hutchinson (pictured below) who is also a patron of QMusic.

Commenting on the project, Hutchinson said he wanted to deliver the medium-sized music venue as Brisbane needed it.

He told Brisbane-based media “ever since Festival Hall has been knocked down I’ve been looking to replace it because it has taken a fantastic venue from the centre of Brisbane.

“Brisbane is not like Sydney or Melbourne, it lacks something like this and so my developer mates have always had an eye out for me and this came up and he said this is the perfect site.”

Festival Hall was demolished in 2003 and replaced by the Festival Towers apartment development. 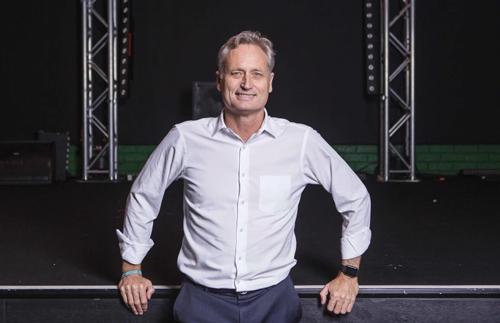 The 2500 metre² Fortitude Valley venue will be designed to reflect a modernised 1950s facade while the inside will be designed as a live venue. An additional 1,000 metre² of retail and food-and-beverage outlets will also be created.

Collins said the team had learned a lot since the early days of The Triffid, which opened in 2014, explaining “I guess our hunch about the potential growth of the live music scene back then has paid off in spades.

“I think that venues created for music by musicians add something extra to the whole experience for both audiences and performers.”

Piticco said they wanted to replicate The Triffid but in a venue with more capacity.

He added “not massive, but just something that will fill the gap for a larger audience.

“This is another case of the right venue coming up at the right time.”

Brisbane City Council Lord Mayor Graham Quirk welcomed the project, concluding “this is yet another venue that will add to our reputation as having a world-class entertainment scene.”

The council had previously approved a high-rise residential development on the site at 312 Brunswick Street.

Construction of the live-music venue is expected to start in January 2018 and be completed by mid-2019.