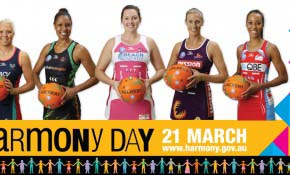 Netball Australia is highlighting its One Netball Program, as well as the programs run by its state and territory organisations to create a safe, fun and inclusive sporting environments for everyone who wants to play.

In a communication to stakeholders, Netball Australia states "these programs are providing opportunities for players starting from a young age.

"Those children, aged between five and ten years old, are being introduced to the sport free-of-charge to their families thanks to funding from the Australian Sports Commission.

Netball NSW's Community Engagement Manager Kristy Guthrie said the physical part of the program provides an opportunity for 40 participants and volunteers to participate in netball through fun games and activities, and experience great benefits like getting fit, working as a team and getting a better understanding of the sport.

These workshops are targeted at girls predominately aged between 13 and 18 years old to discuss a range of topics in a fun, friendly and safe environment. The aims of the workshops are to encourage the participants to learn new skills that will assist them both on and off the court.

Guthrie said this program has been made possible due to funding from the Australian Sports Commission under the Multicultural Youth Sports Partnership Program, stating "SAIL is a fantastic program that runs all year round for the Sudanese communities in the Seven Hills and Blacktown areas.

"I am thrilled to be part of the program and provide an opportunity for girls new to netball to participate in both the workshops and skills."

Based around introducing primary school-aged children to the game in a fun and safe environment, the program facilitates their transition to local netball clubs in their community. Those clubs and Associations have strong involvement in school netball clinics.

"Our 'Netball For All' philosophy is that all people should feel welcome in netball. A sustainable approach through training and developing our volunteers ensures that this philosophy is embedded into netball environments across the state."

This year Netball WA is piloting a Multicultural Youth Sports Program with the aim of creating awareness for, and raising the profile of netball among CALD populations in the state.

Programs will operate in areas that have diverse populations and strong local netball Associations that can support the program and provide ongoing opportunities for those that want to continue with the sport whether as a player, volunteer, official or administrator.

Netball WA will deliver five free ScoolNet netball clinics to primary schools in each of the targeted locations. Beginning in Week Four of Term Two, a one-hour Netball 4 All Program will be held one afternoon a week and is open to anyone in those communities keen on learning how to play netball.

The Awards will take place on Monday 24th March at Parliament House in Canberra.