The cross-media campaign features television commercials aired in metro markets including Brisbane and Sydney, as well as major regional coastal centres and will be supported by targeted social media and a new destination website.

The two councils signed a Memorandum of Understanding last year to cooperate on Tourism, leading to the development of the Longreach and Winton Sub-Region Tourism Activation Plan 2019 – 2024. The initiative aims to capitalise on over $50million worth of State and Federal funding invested in new Tourism product between the two communities in recent years. There is also a focus on promoting the two regions as a year-round destination.

Longreach Mayor Tony Rayner said the two communities share a common interest in Tourism and notes “between the two of us we have the biggest attractions in Outback Queensland, but we also have the most product, including a lot of mature wholesale product that’s already built around visiting Longreach and Winton together.” 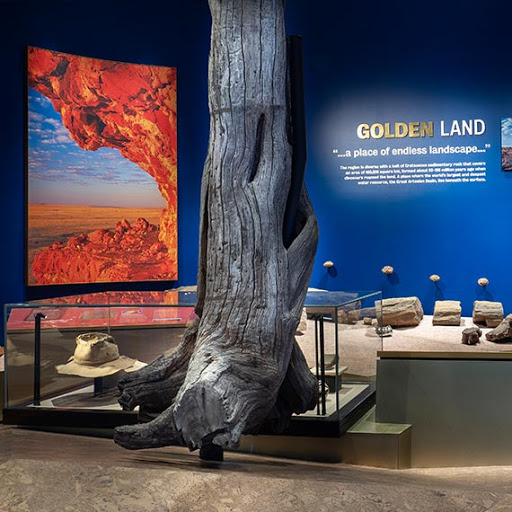 Winton Mayor Gavin Baskett, who is an experienced rugby league referee, said despite a fierce football rivalry there are more things that unite the towns than the things that divide them.

Baskett adds “the Tourism industry in our two regions is more developed than in other places, so it makes sense for us to work together. But we’ve also got this shared history with strong links to Australia’s bush heritage. You can see that in our big attractions like the Waltzing Matilda Centre and the Australian Stockman’s Hall of Fame.”

The Australian Stockman's Hall of Fame museum located in Longreach pays tribute to pioneers of the Australian outback and is dedicated to Australian stockmen who have shown bravery and courage.

The Waltzing Matilda Centre is the first museum in the world dedicated to a song and boasts state of the art interpretation, telling the story of Waltzing Matilda which was written in the town of Winton in outback Queensland by Banjo Paterson.

Both towns also feature in the history of Qantas, with the Qantas Founders Museum in Longreach launching major upgrades recently. Mayor Rayner said both communities are proud of their connections to the Qantas story.

Mayor Rayner adds “Yeah, they never let us forget that Winton was the town where the company was formed before relocating to Longreach. But that’s just the point – you have this incredibly remote part of the world that those founders decided could be linked by an air service.

“We may still be remote, but we’re not isolated, and it’s never been easier to get here – which is what this new campaign is all about.”

Mayor Baskett agrees “we want everyone to experience what we have out here – our starlit skies, our ancient landscapes, our way of life, and our rich history.”

He said the region’s historic significance has taken on a new dimension with the establishment of the Australian Age of Dinosaurs Museum.

“We’ve always been famous for our history but now, thanks to the Australian Age of Dinosaurs, we can trace it back 145 million years!”

The mayors said they hoped the partnership would benefit the rest of Outback Queensland too.

“Ultimately, we all want the same thing for our region” said Mayor Rayner. “I think by working together, we’ll actually make a difference to the whole of Outback Queensland – beyond just our two towns.”

The cross-media campaign will run through July and August.