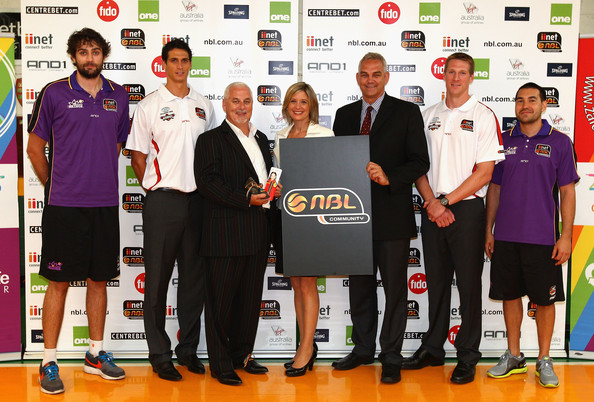 The National Basketball League (NBL) has launched a bold new community program that aims to have NBL players and coaches visit over 150,000 school age children over the next 12 months.

The new NBL Community Program will harness the collective strength of existing NBL clubs' community engagement programs and play an active role in the growth and development of basketball in Australia supporting the community plan developed by Basketball Australia.

Basketball is one of the largest participation sports in this country with in excess of one million Australians playing basketball, and the sport is played almost equally by males and females with competitions played all year round.

Keneally said the NBL has a proud history of running positive community programs, and the league is now formalising its clubs' efforts under a consolidated and unified program that will strengthen the awareness and promotion of its existing commitment to community and at the same time provide the league with the opportunity to increase its efforts in community program delivery, charitable support and game development.

Keneally stated "since its inception in 1979, the NBL and its Clubs have delivered literally hundreds of thousands of school clinics and visits that have reached millions of Australian and New Zealand school children.

"Our clubs are out and active in their communities every single day and we identified the need to consolidate all these individual efforts into one unified vision for our interaction with the community.

"All nine of our NBL clubs have committed to support the NBL Community Program and separate to their individual extensive community engagement will provide a minimum of 100 player appearances per team to deliver the programs of NBL Community.

"We are aiming to reach over 150,000 Australian school-aged children through those visits, which will reaffirm our key messages of healthy active living, social inclusion and education."

A vital component of the new NBL Community Program will be the holding of a 'Community Round' for Round 21 of the iiNet NBL Championship this weekend.

As part of this special themed round, all seven iiNet NBL Championship home games for Round 21 will help support Zaidee's Rainbow Foundation, a charitable organisation aimed at promoting organ and tissue donor awareness.

Players in Round 21 games will wear rainbow shoelaces during their games and the NBL's new Community page on the NBL website will also have a Zaidee's donation portal.

Zaidee's Rainbow Foundation Chief Executive Allan Turner, said the NBL's support was invaluable, stating "we are so proud to be the chosen charity of the NBL's inaugural community round.

"The exposure that organ and tissue donation will receive through this wonderful initiative from the NBL cannot be underestimated, and it is particularly pertinent given that it coincides with DonateLife week. This is another great leap forward for Zaidee's, and one that we hope will open more doors for us across Australia. If this round helps to save the life of just one person by inspiring discussion amongst the community, then it is an outstanding success as far are we are concerned."

As part of Community Round, NBL teams hosting home games will participate in a range of activities during Round 21 including:

• The Gold Coast Blaze will host a Family Fun Day at the Gold Coast Convention Centre prior to their home game against the Wollongong Hawks;
• The Adelaide 36ers will hold auctions to raise money for the Hudson Maher Foundation and Cystic Fibrosis SA;
• The New Zealand Breakers will be auctioning a team experience to raise money for CanTeen;
• The Melbourne Tigers will showcase community basketballers in their pre-game and halftime breaks.

Zaidee's Rainbow Foundation exists to inspire discussion about organ and tissue donation in the community. The foundation was created to honour the legacy of seven year old Zaidee Turner, who donated her organs and tissues after her sudden death in 2004.

For more information go to www.zaidee.org