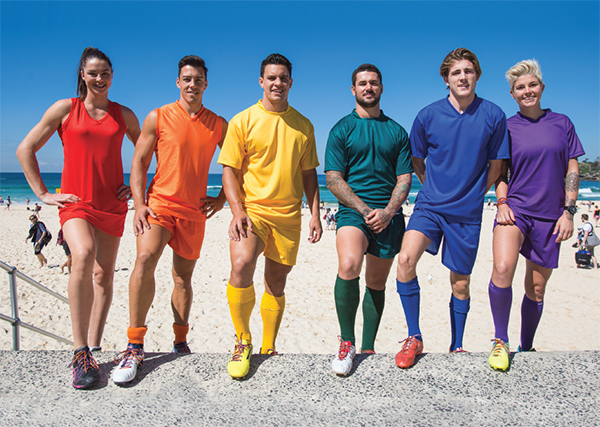 At a launch held today at the Sydney Cricket Ground, leading national sporting organisations (NSOs) unveiled their policies and guidelines relating to the participation and inclusion of trans and gender diverse people.

By formalising their stand on inclusivity, these Australian sports have shown a commitment to providing environments where everyone involved is treated with respect and dignity.

Pride in Sport National Program Manager, Beau Newell, said that the joint commitment made by the NSOs marks a major moment in Australian sport and advised “this launch demonstrates a fundamental shift within Australian sport towards the greater inclusion of trans and gender diverse athletes. By formalising their stand to be inclusive of trans and gender diverse people, these Australian sports have shown a true and tangible commitment to providing environments where everyone involved is treated with respect and dignity.

“Sport has an amazing opportunity to provide a safe and inclusive environment to all people, including people with diverse genders and sexualities. As a country that holds sport very close to our hearts, it also has a unique position to be able to help change attitudes of many Australians. The demand for more inclusive sporting cultures makes clear that Australian society increasingly expects that sport should be for everyone, including trans and gender diverse people.”

In addition, a range of NSOs have also committed to developing trans and gender diverse inclusion frameworks for their sports following the launch, including:

After launching their own trans and gender diverse inclusion governance in 2019, Cricket Australia have also committed to supporting other NSOs throughout this process.

This initiative, spearheaded by ACON’s Pride in Sport program, Australia’s only program specifically designed to assist sporting organisations with the inclusion of people of diverse sexualities and genders at all levels, was undertaken following the identification of a need for national guidance on how NSOs can be inclusive of trans and gender diverse people.

Lifeline Chief Executive, Colin Seery notes “At Lifeline, we are well aware of the detrimental impacts of isolation, rejection and discrimination – impacts that can be so devastating to mental wellbeing, they can lead to suicide.

“A sense of belonging is one of our most important human needs and sport provides a great opportunity for connecting with others. Today’s commitment by these national sporting organisations to make their sports more welcoming, inclusive and safe for all Australians is a positive step towards saving lives.”

ACON’s Manager of Trans and Gender Diverse Equity, Teddy Cook advised “we know that trans athletes can be targeted on the unfounded basis that we affirm our gender to seek a competitive advantage in sport, but this is untrue and incredibly damaging to all – trans people and our cis allies.

“While many trans people across Australia are members of very inclusive sports clubs, many also report that joining a club is an intimidating and frightening experience. The commitment from these sports provides much needed guidance to the many clubs working hard to be the open and inclusive sport they want to be for all athletes, including those athletes who are trans.

“It is the right of every player, coach, volunteer and fan to feel accepted and affirmed, on and off the sporting field, including trans and gender diverse people, and we know that when this happens, mental and physical health outcomes dramatically improve.”

ACON Vice-President and Co-Founder of Pride in Sport, Andrew Purchas heralded the launch as world-first move adding “I congratulate all the NSOs that have made this landmark commitment in working towards a progressive and welcoming Australia, and encourage others to consider making their sports an inclusive place for all. We are proud of community sports clubs who continue to welcome and affirm their trans players, and to those who look forward to doing so in the near future.

Image courtesy of Pride in Sport.