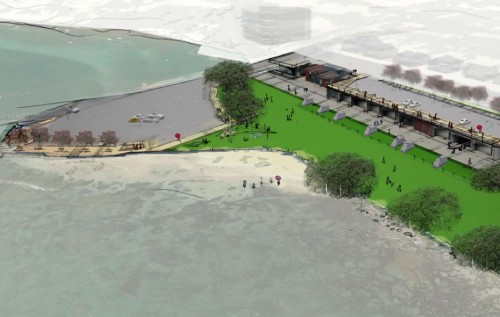 Takapuna Beach has been confirmed as the venue for New Zealand's National Ocean Water Sports Centre (NOWSC) by the Minister of Sport and Recreation Murray McCully and North Shore City Mayor, Andrew Williams.

Speaking at the nearby Takapuna Boating Club, the Minister confirmed that the $8 million facility would cater for sailing, triathlon and ocean kayaking. The area is also used for a myriad of other ocean sports including ocean swimming, kite surfing, surfboats and surfing.

The novel concept for the facility known as 'The Bunker' is that it will be located in a large excavation in the adjoining carpark digging a hole 36 metres long by 60 metres wide - which will be covered back to the existing land level and topped with a deck and viewing area.

The facility will be capable of storing about 80 boats, plus RS:X and Techno windsurfers, along with paddleboards and surfskis plus waka/outriggers and kayaks.

A glass fronted area will open onto the Takapuna Beach reserve, which will house changing rooms and showers plus high performance coaching facilities for Yachting New Zealand and the other ocean watersports.

For major regattas and other events the facility will be designed to be used for spectators, media and event organisation taking some of the load off the nearby Takapuna Boating Club. The Takapuna Boating Club and beach area has been the venue for some 14 world sailing championships since the 1970's and was the venue for the 2008 World Championships and Olympic Qualification regatta for four Olympic classes in 2008.

The area is close to a major shopping area, with plenty of accommodation within walking distance plus some of the best sailing waters in the world, making it a unique world sailing venue. The area looks out onto the Hauraki Gulf - venue for the 2000 and 2003 America's Cups.

Funding for the new facility, part of a series of high performance sporting infrastructure announcements made by the New Zealand Government in the past week, will come from Government sources, plus the North Shore City Council and private funding sources.

The planning process is expected to be completed by mid-September 2010 and the facility should open in 2011.

Image: Artist's impression of the NOWSC.