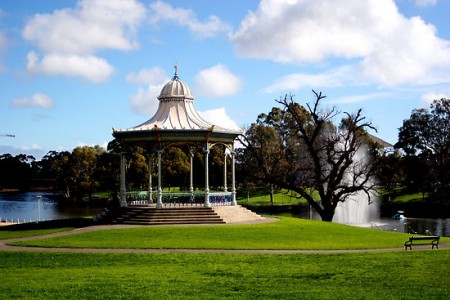 The influential urban design of Adelaide, Australia's first planned city, has been granted Australia's highest heritage honour with its inclusion on the National Heritage List. The listing recognises the 1837 Adelaide Park Lands and City Layout as a technical masterwork which went on to influence the planning of other towns in Australia and overseas.

Speaking of heritage listing, and the role of the design's creator and surveyor, Colonel William Light, Minister Garrett explained, "the vision behind the Adelaide Park Lands and City Layout remains true today with the original 1837 plan an integral part of the contemporary cityscape of this great Australian city.

"The mature and picturesque parklands here in Adelaide are an enduring treasure for the people of South Australia and the nation as a whole, and their inclusion on the National Heritage List is a fitting recognition of their value.

"Adelaide was the first place in Australia to be planned and developed for free settlers, not as a penal settlement or as a military outpost, and the masterwork of Colonel Light quickly became the model by which other towns in Australia and overseas were planned."

The Federal Member for Adelaide, Kate Ellis added, "this move is fantastic recognition of the historical significance of our city's unique layout and parklands".

Minister Garrett said the Adelaide Park Lands were the most extensive and intact 19th century parklands in Australia today.

"The Adelaide Park Lands, also enjoy long standing links with the local community as a hub for recreational and civic activities for well over 150 years. It was a focal point for community groups campaigning for its protection as far back as 1869.

"From today the Adelaide Park Lands and City Layout will be afforded the highest protection under the Australian Government's Environment Protection and Biodiversity Act."

SA Environment Minister Jay Weatherill also added that "the success of cities depends on their liveability. The layout of Adelaide and its parklands is a key feature of the attractiveness of the city.

There are currently 81 places in the National Heritage List, reflecting the story of Australia's development, from original Indigenous inhabitants to the present day, Australia's spirit and ingenuity, and unique living landscapes such as Old and New Parliament Houses in South Australia and the Australian Alps, Bondi Beach, Melbourne Cricket Ground, Kakadu National Park and Port Arthur Historic Site.

Adelaide Park Lands and City Layout site includes 900 hectares in total and is defined by the 1837 layout of streets including parks in the city centre and significant areas such as Victoria Square, Hindmarsh Square, the Botanic Gardens, Palmer Gardens and Brougham Gardens in North Adelaide.

Privately owned land between the road reserves in the city layout, the railway reserves and State Government lands and Institutions has not been included in the National Heritage Area.