National Gallery of Australia in Canberra to allow art selfies 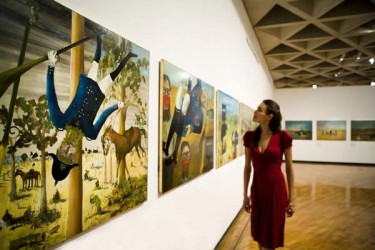 The National Gallery of Australia (NGA) in Canberra has lifted a longstanding ban on visitors photographing the collection and taking selfies with the artwork.

Since the beginning of the year visitors have been able to use their cameras and smartphones to document their visit to the NGA.

NGA Assistant Director Simon Elliott said many of the artworks in the gallery could be photographed, including most permanent exhibitions.

Elliott told the ABC that the decision was made in order to move with the times, stating "in 1982 when we opened you had to leave your camera in the cloak room.

"These days we wouldn't dream of taking people's phones off them and we don't take their cameras.

"People like to take their individual souvenir photo, so I think it will make people happier to visit the gallery."

Elliott added that he hoped allowing people to share photographs on social media would grow visitor numbers to the gallery.

He added "our website has over 75,000 images, but through social media we'll expand our audience dramatically.

"We hope that the younger audience who are a little bit more technologically sophisticated will take advantage of this feature but you'd be surprised how many older people have got smart phones and want to do the same thing.

"It's across the board but certainly young people are more interested in using digital technology and sharing their photos online."

The NGA was one of the last galleries in the world to still enforce the ban on photos.

Some contemporary artworks in the NGA, including most of the visiting exhibitions, will still be excluded from photography, because the living artist maintains copyright protections and can ask that their work not be photographed.