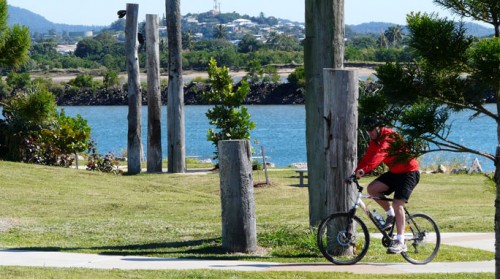 Mackay Regional Council's investment in the health and wellbeing of the community has been recognised with a National Local Government Heart Foundation award.

The region's Bluewater Trail has been named the 2010 National winner for its commitment to promoting physical activity and providing a sustainable pedestrian and cyclist friendly activity.

Mayor Col Meng is delighted with the accolade and paid tribute to the vision of the previous council, stating "this has been a seven year project which was initiated by Mackay City Council and its ambitious plan to revitalise the city and foster activity along the riverfront."

The trail had been completed in stages thanks to significant funding commitments from the Australian Government and Queensland Government.

The Bluewater Trail was named the Queensland winner in the planning for active living category and made it a double celebration, by being crowned the National winner from five other category finalists.

Mayor Meng added "these two awards are recognition of those who have worked on the trail from surveyors to labourers and is something the region can justifiably be proud of."

Councillor Steindl explained that "it is fast becoming an iconic feature of the region that encourages activity and promotes healthy living."

To celebrate the national accolade, residents were invited to walk the trail on Fatherâs Day, Sunday 5th September 5 at the 'Get Dad Active' promotion.

Those who walked the trail were eligible to win prizes including flights for two to Brisbane, bicycles, dinner vouchers at Wests Leagues Club and gym sessions at City Fitness.

For more information go to www.mackay.qld.gov.au