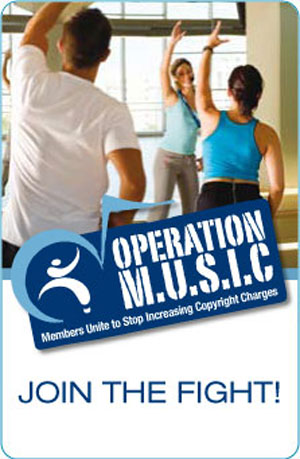 Today sees the Copyright Tribunal of Australia begin its hearing a claim from The Phonographic Performance Company of Australia (PPCA) to change both the rate and the nature of the licence fee paid by fitness clubs and recreation centres to the PPCA.

PPCA, the industry body representing the major record labels, has applied to the Copyright Tribunal for a massive 4,000% increase in the fees gyms and facilities pay to play original music in exercise classes.

Fitness centres currently pay a tariff of about 95c per class to provide gym users with popular tunes to move to.

The PPCA wants to charge a flat fee of $4.54 per member per month, regardless of whether or not members participate in group fitness classes. If successful, a typical fitness club with 1,300 members will be forced to pay $140,000 in annual music licensing fees, a massive increase on the $2,654 they currently pay. Club's are almost inevitably going to pass these cost increases on to members, dramatically increasing the cost of exercise.

"The music industry is in trouble, nobody's buying CDs and the PPCA wants to plug the hole left in their pockets by passing the burden on to our clients."

Stace believes that any fee hike would "threaten the future of group exercise", push up membership fees and force some gyms out of the market.

She accuses the PPCA of trying to impose a "fitness tax" despite Australia's status as the "fattest nation in the world."

Peach recently stated "we all know how much the fitness industry is worth, particularly Fitness First, it's a billion-dollar industry.

"We feel confident in our position that one of the reasons for the hysteria on the other side is because they know how important music is in a gym. I mean, who wants to exercise in silence?

"Music is so central to what they're doing, but it would seem to be valuable to them in every way except financial."

Peach said the current tariff worked out to 5c per person for a class containing about 20 people and undermined the music's value, adding "any increase is going to seem huge in percentage form because the point we're starting off at is so low."

The Copyright Tribunal hearing is expected to last up to five weeks.

Fitness Australia is seeking needs financial contributions to fight this battle at its 'Operation Music' website.

Lauretta Stace will be writing on this issue in the next issue of Australasian Leisure Management.

For more information go to  www.operationmusic.org.au