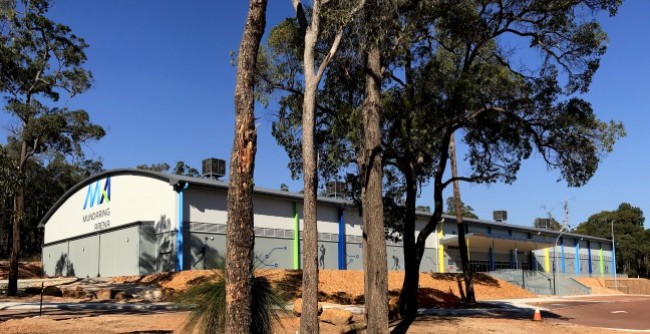 The Shire of Mundaring has recently completed the new $10.1 million Mundaring Arena.

The development of this facility, the largest capital project the Shire has undertaken, was a collaborative effort between the Shire and the three main sporting associations of Hills Raiders Basketball, Eastern Hills Netball and Hills Night Hockey.

Commenting on this collaboration, Kirk Kitchin, the Shire of Mundaring’s Manager Recreation and Leisure Services advised “over the past 30 years these sporting associations have built up their competitions to over 3,000 players which reached the capacity of the eight outside courts (which) is is remarkable given the relatively small size of the population of the Shire of Mundaring.

“These groups worked tirelessly with the Shire and have been there through the whole process in the past six years of concept plan development, funding, tendering and ultimately design and construction.”

Welcoming the facility, Hills Raiders Basketball Association spokesperson Neridah Zlatnik told local newspaper The Hills Gazette “now we have the opportunity to develop our players further and give them the chance to play at a higher level without having to move clubs or travel long distances for weekly training.”

The project was backed by $3 million from the Western Australian Government. In addition, the Mundaring Community Branch of the Bendigo Bank contributed $100,000 towards the project and the local with local basketball, hockey and netball associations contributing between $10,000 and $30,000 each.

Mundaring Arena image courtesy of the Shire of Mundaring.