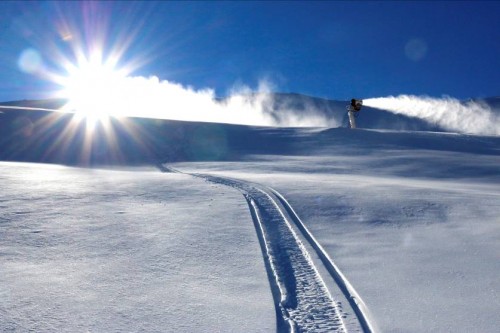 Mt Hutt has taken out the title of New Zealand’s best ski resort for the fifth year in a row at the World Ski Awards in Austria over the weekend.

Attending the World Ski Awards gala dinner in Kitzbühel, Austria to receive the award on behalf of the mountain team, Mt Hutt General Manager - Operations James 'Cheesey' Urquhart commented "it’s a neat moment to be standing amongst the best-of-the-best in the ski industry and accepting this award on behalf of the Mt Hutt team. I know we are all extremely proud of the recognition.”

Humbled with the award win and glad Cheesey had the privilege of accepting the ski area’s fifth award, Mt Hutt Ski Area Manager James McKenzie stated “Cheesey has been part of the Mt Hutt family for fifteen years and passionate staff like him are a huge part of what makes us so successful. Receiving this award for the fifth year in a row is an incredible achievement and testament to how hard our team works.

“I think receiving this accolade five times reflects a combination of factors that makes us so popular. Our authentic Kiwi hospitality, awesome terrain mix, Kaitiakitanga initiatives, and the fact skiing and riding with us is so accessible with our competitive season pass pricing and Kids4Free offering creates a pretty compelling package.”

McKenzie believes the title also underscores an affinity and passion guests have for the mountain and is grateful the public supported Mt Hutt to take out the win again, adding "it’s an honour to be recognised by our guests as the best ski area in New Zealand. Mt Hutt is Canterbury’s mountain and this win just adds to that local pride we all share as Cantabrians. So I’d like to thank those who voted for us, it really means a lot.”

The past 2019 season saw 2 kilometre of new trails opened and substantial investment in sustainability initiatives across the mountain including eliminating all single use cups and cutlery in the food and beverage outlets and installing a new food waste system.

Looking forward to next year, McKenzie went on to say "for the 2020 season we are investing in more snow guns, a new groomer and doubling the supply rate of water to our snowmaking system to ensure we continue to enjoy one of the longest seasons in New Zealand. We’ll also be adding another 44-seater bus to our transport fleet to transfer guests from lower carparks more efficiently along with further upgrades to our access road and carparks.”

The World Ski Awards is the only global initiative to recognise, reward and celebrate excellence in ski tourism.

The Mt Hutt team will be celebrating the win with guests at Coca Cola Christmas in the Park on Saturday 30th November with snow play and giveaways in the kid’s zone.