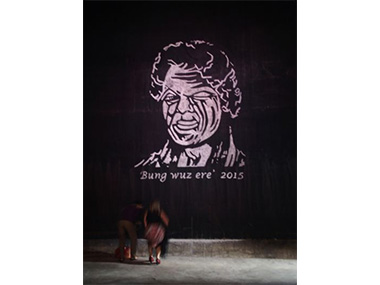 This was the first land grant by Australia's colonial authorities to an Aboriginal person. Led by Mundine, a group of emerging and established Indigenous artists developed work inspired by the life and story of Bungaree, who was both an important Aboriginal figure in early colonial Sydney and was the 'First Australian', christened as such by Matthew Flinders, with whom he tackled the inaugural circumnavigation of the Continent.

Originally, the gallery side of the show was intended to tour the country as Bungaree himself had done; but funding for that venture could not be secured.

The contemporary NSW artists involved acknowledged Bungaree’s life while addressing the continuing dilemma of living between cultures and conflicting world views. And now, Bungaree's Farm will tour - featuring in July at the 2015 Cairns Indigenous Art Fair. It's also being sought by other galleries and cultural institutions around the country. Long term, Mosman Art Gallery is in discussions with institutions in both China and Japan regarding international exhibition of the works.

Mosman Art Gallery Director, John Cheeseman declared it had been a transformative project for the Gallery, stating "this award gives recognition to a powerful and complex series of works which we trust will provide a lasting legacy in influencing and extending contemporary Aboriginal arts practices in Australia.

We are honoured to be given this award and I am humbled to receive it on behalf of the curator, Djon Mundine as well as the project’s artists, supporters and gallery staff."

Mosman Art Gallery partnered with local, state and federal organisations and groups including Mosman Reconciliation, Sydney Harbour Federation Trust - who offered the newly restored former Oil Tanks on Georges Heights as the venue for the 'Farm' - the National Parks and Wildlife Services on Middle Head - where familiarisation residencies and workshops took place - and Arts NSW to produce the exhibition.

The Gallery was also the winner in the MAGNAs Indigenous Project category.

For more information go to www.mosmanartgallery.org.au