More to AFL supporters than footy 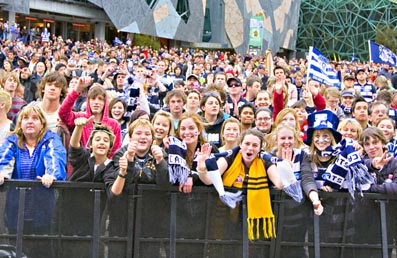 With the official 2013 AFL season about to kick off, Roy Morgan Research has been looking at the spending patterns of AFL's 7,579,000 AFL supporters (40% of the Australian population aged 14 and above).

With the seven months of thrills, spills, goals and glory about to get underway, Roy Morgan Research found (unsurprisingly) that Australia's largest concentration of footy fans (38%) can be found in Victoria, the AFL's historic heartland. Specifically, 61% of all Victorians support an AFL team, in contrast to 24% of people in New South Wales and 28% of Queenslanders. Men comprise the majority (55%) of all supporters.

The research found that these supporters don't just follow AFL: sport is a way of life for them. Not only are they 22% more likely than the average Australian to have played a sport in any given three-month period, they're 63% likelier to have attended a professional sports event.

Of all the teams, the Richmond Tigers have the highest proportion of fans who play sport themselves, while more Hawthorn Hawks supporters attend sporting events than those of any other team.

AFL supporter also like to bet, the research finding that, in any given three-month period, AFL fans are:

45% likelier than the average Australian to have placed a bet;

49% more likely to have gone to the races;

24% likelier to have visited a casino.

A larger proportion of North Melbourne Kangaroos and Carlton Blues supporters go to the racetrack than followers of any other team. Fans of the West Coast Eagles and the Fremantle Dockers, on the other hand, are more partial to trying their luck in casinos.

When it comes to eating out and ordering in, AFL supporters are consistently more likely to do both than the rest of the population. In any given three-month period, the typical AFL fan is:

12% likelier to have eaten at a BYO restaurant;

20% likelier to have gone to the pub for a drink.

Melbourne Demons fans are most likely to dine at licensed restaurants, while Collingwood supporters reveal a marked preference for fast food.

Commenting on the findings, Roy Morgan Research Industry Communications Director Norman Morris stated "there's a lot more to the average footy supporter than football (and our) data reveals that this huge section of the population is more likely than other Australians to gamble, eat out and go to professional sporting events.

"This presents many possibilities for prospective sponsors across various industries: reaching this influential group shouldn't be difficult given their wide-ranging interests."

For more information go to www.roymorgan.com