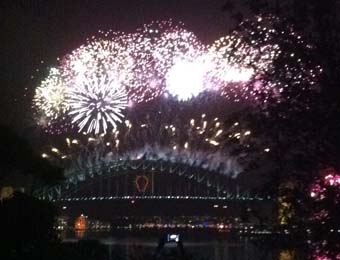 Sydney's New Year's Eve fireworks were watched by over one billion people worldwide while more than a million people lined Sydney Harbour to welcome 2015.

With City of Sydney Lord Mayor Clover Moore saying that "over a million" people came wateched the display, initial attendance figures suggest crowd numbers were less than in previoius years.

Seven tonnes of fireworks were set off over the course of the evening at a cost of $750,000.

The first of the displays started at 9pm, with 100,000 pyrotechnic effects lighting up the sky over the next three hours.

Tribute was paid to the Martin Place siege victims Tori Johnson and Katrina Dawson in the form of a floral display on the pylons of the Sydney Harbour Bridge.

More than half a million people converged upon the centre of Melbourne, with $400,000-worth of fireworks fired into the night’s sky to mark the New Year. The mass pyrotechnic display, comprising 7.5 tonnes of fireworks from 16 buildings, came with its own soundtrack by the Melbourne group Strange Talk DJs.

Free public transport and extra buses and trains were put on in most major cities to get revellers safely home.