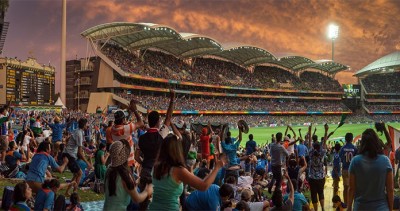 One year on from the completion of its redevelopment, the Adelaide Oval has proven itself as a sporting and entertainment venue that continues to captivate Australia and the world.

The redeveloped venue has hosted more than 1.69 million sporting and music fans in its first year including more than a million AFL fans.

South Australian Infrastructure Minister Stephen Mullighan said the first AFL season broke all attendance records with a 60% increase in crowds on the last season of AAMI Stadium, stating "and we have just seen a record-breaking 2014/15 cricket season with 434,859 attending the Cricket World Cup, Big Bash League, Test and One Day matches at Adelaide Oval.

“The Rolling Stones scored a record Adelaide Oval crowd of 54,115, while the oval also drew in Adelaide United fans with a record-high crowd for an A-League game in SA of 33,126.

Stadium Management Authority Chief Executive Andrew Daniels said the Adelaide Oval had proven its ability to compete on the global stage, adding "over the past year, we have successfully staged something in the order of 45 major event days plus hundreds of other functions and events.

“That underlines the true multi-purpose ability of the Oval and is a testament to the skill and expertise of our team in the way we are able to host multiple major sporting occasions, concerts and events throughout the year.

“We are proud to be managing and operating this fantastic facility on behalf of the people of this State.”

The result is an economic boost and ensuring visitor numbers and hotel occupancy rates continue to grow.

AFL games at the Adelaide Oval generated about $77.4 million of new revenue in the CBD - directly associated with attendance at AFL games in the city - more than three times the expected amount.

Thousands of interstate and international visitors flocked to the India/Pakistan Cricket World Cup match with many left sleeping at the airport because accommodation was full.