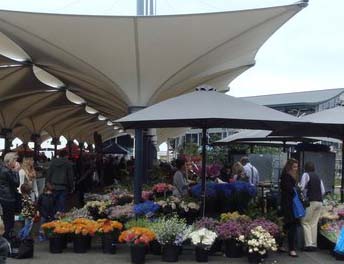 The Moore Park Entertainment Quarter within Sydney’s Fox Studios precinct is for sale, with current owners Colonial First State expecting to an estimated $70 million for the property.

Sydney newspaper the Wentworth Courier reported the sale, stating “after years of declining trade and revenues, the Moore Park Entertainment Quarter has been listed for sale by its owner Colonial First State (CFS).

“The sale, rumoured for some time, could raise up to $70 million for its owners Colonial First State Retail Property Trust and CFS Global Asset Management Property Retail Partnership.”

As the Sydney Showground, the venue was the home of Sydney’s Royal Easter Show from 1882 until 1997, when the Show was relocated to Sydney Olympic Park. News Corp and Lend Lease then spent $430 million redeveloping the site into a working movie studio (Fox Studios), the Fox Studios Backlot theme park and the adjoining entertainment precinct – featuring cinemas, restaurants, bars, retail outlets, health and fitness facilities and an indoor play centre.

After massive cost overruns during redevelopment, and poor performance once open, the Backlot closed in 2001 after just over two years of operation. Subsequently, the site was sold to CFS and separated from the working Fox Studios

While sporadically popular and the home of a range of special events on the former old showground ring, operators have reported an ongoing decline in visitor numbers and trade.

The Wentworth Courier has tried on multiple occasions to seek a response from CFS about a potential sale and the state of business in the area.

Events at the venue include the annual Sydney Family Show, held at Easter and a rival to the Sydney Royal Easter Show.