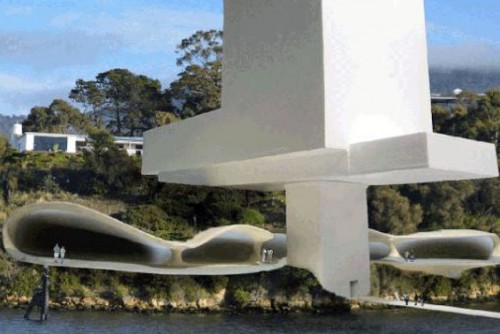 The founder of Hobart’s Museum of Old and New Art (MONA), David Walsh, has revealed details of plans to add a casino and hotel to the world renowned art gallery.

Detailing the $150 million expansion plans in a blog post, including pictures of a proposed casino, museum extension, hotel and playground, Walsh said he planned to extend a dead-end tunnel heading back towards the winery with more gallery space and offices.

He wrote "This will be a large building and I suspect it will cost about as much as the original museum," he wrote.

The extension plans include casino development with a small number of roulette tables, to be called Monaco, and a new 160-room hotel, to be known as HoMo.

While writing about wanting lure high rollers “from countries far, far away” with plenty of cash, “for whom a loss of $100,000 or $1 million is barely a blip on the radar” Walsh has encountered opposition from the Federal Group, which holds the exclusive rights to operate casinos and poker machine venues in Tasmania until 2023.

In September, Walsh rejected a deal that would have allowed the Monaco to go ahead, because it would have preserved Federal's monopoly on poker machines.

In the blog he said the new projects were not contingent on the proposed casino, Monaco, going ahead but wrote "Monaco might make it a little easier to pay for all this.”

While he waits for government approval for his new plans, he intends to carry on with the $21 million Turrell Pavilion, an extension of the museum that will house works by American light artist James Turrell.

The self-funded MONA has revitalised Tasmanian tourism but Walsh recently told the ABC it was losing $10 million a year.

The museum does not charge an entry fee to Tasmanians.

While he waits for government approval for his new plans, he intends to carry on with the $21 million Turrell Pavilion, an extension of the museum that will house works by American light artist James Turrell.

Image: An artist's impression of the casino planned for MONA. Courtesy of MONA.