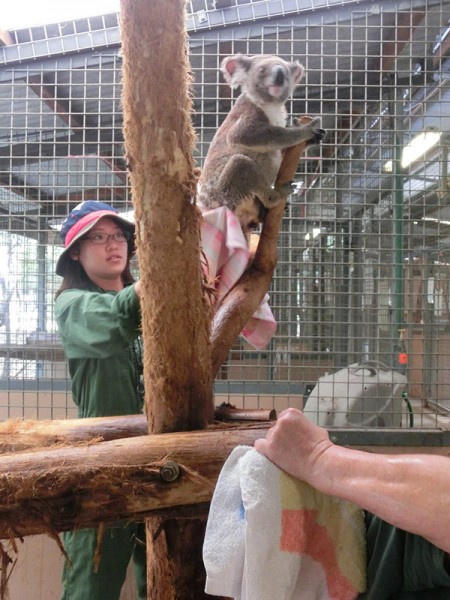 The centre, previously known as the Moggill Koala Hospital, was opened in November 1991 by the Queensland Government in response to public concern about the increasing number of injured and diseased koalas found in South East Queensland.

The centre, along with its staff and volunteers, have been an important part of the SEQ Wildlife Hospital Network, caring for thousands of koalas for more than 30 years.

Queensland Minister for Environment and Science Meaghan Scanlon welcomed the first koalas into the new centre and to oversee their Chlamydia vaccinations, as part of an exciting trial to beat the devastating disease plaguing the koala population.

Minister Scanlon notes “The Queensland Government committed $830,000 to support the Moggill Koala Rehabilitation Centre in its role as a specialist rehabilitation centre supporting sick, injured and orphaned koalas and preparing them for release back to the wild.

“Over the years the role of Moggill has evolved, as other specialist wildlife hospitals have been developed by Australia Zoo, Currumbin Wildlife Hospital, and the RSPCA.

“Together with these three wildlife hospitals, Moggill forms what is called the SEQ Wildlife Hospital Network, and for the last five years, the Queensland Government has contributed $7.5 million towards supporting this important public-private partnership.

“This demonstrates the Queensland Government’s commitment to ensuring these beloved animals are not only given the help they need to survive but are also supported in their rehabilitation to ensure they can thrive.”

“Once the vaccine has been administered, the koalas will be returned to the wild so their health and survival can be monitored for a period of time in order to determine the efficacy in protecting the animals from future infections.

“It’s vital we take care of the health of the state’s koalas as their long-term survival is under serious threat – Chlamydia can cause infertility which directly reduces reproduction and the future viability of the population.

“The refurbishment has brought the Moggill facilities up to modern standards and enables essential new equipment to be purchased and installed to support its role as a rehabilitation centre.

“Moggill was the first and original koala hospital that was established to respond to the high levels of injury and mortality observed in the koala populations in the 1980s.

The chlamydia vaccinations given to the animals are part of a pilot program funded by the Queensland Government using vaccines developed by the University of the Sunshine Coast to establish the efficacy of broadscale vaccination in fighting the threat of chlamydia to koalas when they are returned to the wild.