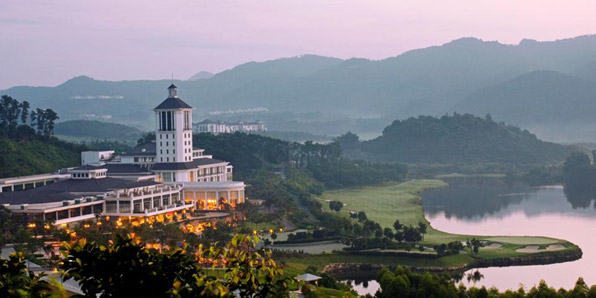 With predictions that the Chinese golf market is set for massive expansion, the Mision Hills Group is looking to drive the industry through a business model of offering golf, other sports, health services, five-star hotel resorts and exhibition spaces.

According to the China Golf Association, there are at least three million golfers in the nation and more than 500 courses, an astounding number considering there was no golf course in China until 1984.

Based in Shenzhen in southern China, Mission Hills Group Chairman Ken Chu is looking to expand his company, which currently has 15,000 staff, to golf clubs in other parts of China - through the use of brand marketing.

In an interview with China Daily, Chu explained "we are bringing our tried and true brand and golf management services to Beijing, Shanghai, Xi'an, Yunnan, Chongqing and other destinations.

In 1994, Mission Hills began its golf operations in Shenzhen and Dongguan, Guangdong province, with 12 courses designed by some of the biggest names in the sport, such as Jack Nicklaus, Greg Norman and Ernie Els. The courses were completed in 10 years.

The golf club, regarded as the world's largest golf facility by the Guinness World Records in 2004, has played host to more than 100 international tournaments, including the 1995 World Cup of Golf and the 2001 Tiger Woods China Challenge.

With another 10 courses that opened last year on the island province of Hainan, Mission Hills owns properties covering more than 40 kilometres2.

Chu adds "I understand that there is land restriction in golf development in China so it doesn't mean Mission Hills will roll out and go to different cities to build new Mission Hills.

"I can help existing golf courses that are not doing as well as they should to reposition them, to remarket them and to make them profitable for the existing owners because Mission Hills has 20 years of experience in golf management."

Since 2004, the Chinese Government has imposed a national moratorium on building new courses. However, many existing courses are under utilised presenting Chu with the opportunity to brand these courses under the Missions Hills name with contractual agreements to allow, or share, cross-national memberships. Members of a club in Beijing, for instance, would be able to use the Mission Hills courses in Hainan. This move will also allow the company to absorb an unprofitable golf club's staff.

Chu, who took over the reins of the Mission Hills Group after his father, David Chu, died in August. David Chu is considered by many in the nation to be "the father of golf in China" for spearheading the game's rise to prominence, such as building the 12 golf courses in Guangdong.

For more information go to www.missionhillschina.com/en-US/index.html