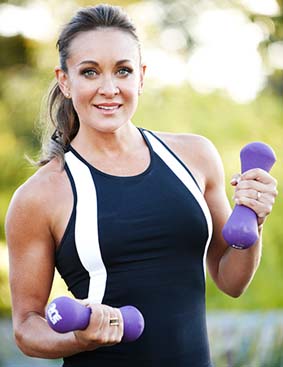 Fitness Australia has inducted Michelle Bridges into its Roll of Honour for her outstanding contribution to the fitness and health industry.

Bridges, widely acknowledged as Australia’s most influential personal trainer, has been in the industry for over 20 years.

Known for her ‘tough love’ messages and heart-warming compassion on The Biggest Loser television series, Bridges is the author of 11 bestselling books and the co-founder of her 12 Week Body Transformation, the country’s leading online health and fitness program, which has empowered Australians to lose more than a million kilograms.

She is also a big supporter of charities such as the RSPCA, Black Dog Institute and the Mother’s Day Classic.

Inducted into the Fitness Australia Industry Roll of Honour at its annual gala dinner (on 24th October), Bridges joins ‘game-changers’ in the health and fitness industry - those that have made an enduring contribution to the industry.

Commenting on the induction, Fitness Australia Chief Executive Lauretta Stace stated "over the past 20 years, Michelle’s passion and commitment to the health and fitness industry keeps growing and she has used this energy and drive to help others achieve their goals.

"Michelle’s vision and entrepreneurial flair has influenced and been an inspiration to her peers."

This is the fourth year that the Roll of Honour has been held, with Bridges joining other giants in fitness who have changed the way the industry today operates.

Welcoming her induction, Bridges stated “I love every minute of working in this amazing industry.

"My working life has always been dedicated to helping people achieve their fitness goals, whether that's one person or a nation.

"I am immensely proud of my contribution to improving our nation's health.  I would like to thank Fitness Australia for this honour and for helping the industry achieve higher standards.”

The Award recognises Smith’s contribution to the Fitness Australia Register of Exercise Professionals and his role on the Sports and Recreational Industry Advisory Committee with Service Skills Australia.

The Award recognises her contribution to the development and advancement of the fitness industry in Australia.