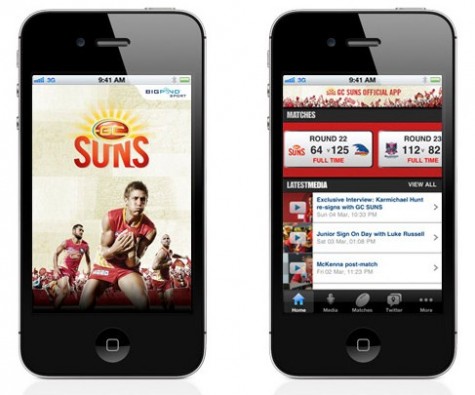 In August last year, the Gold Coast SUNS, along with global information and communications technology giant and SUNS’ partner, Huawei, announced that it had become the first Wi-Fi connected stadium in Queensland.

Launched in March, Gold Coast SUNS’ Chief Executive Andrew Travis said that the stadium app was the next evolution of maximising this platform.

Travis stated "our unique stadium model has helped us lead the way with our match day experience, and this now gives us the opportunity to extend that into the digital experience with match day information, news, ticketing upgrades and exclusive offers, that will only be offered through the app.”

Travis said the smart stadium solution, powered by Huawei, enables the 27,500 seat stadium to take a quantum leap in terms of fan experience.

Travis added “stadiums must offer more than just the live game experience, and when competing with the comfort and convenience of the home environment, it’s important we stay ahead of the game and find additional ways to better understand our fans and build a deeper relationship with them, which in turn will drive customers back to the stadium.”

Lord explained “following successful deployments of Huawei’s Agile Stadium Solution in Europe, we are very proud Metricon is our first stadium in Australia and has now become the first fully connected smart stadium in Queensland.

“These are exiting times for GC SUNS fans as our high performing and high-density Wi-Fi network provides excellent service for tens of thousands of spectators and reaches speeds far beyond the industry average.”

Since rolling out its Agile Stadium Solution in 2012, Huawei has been operating wireless network projects for sports stadiums worldwide. To date, Huawei has deployed Wi-Fi networks in more than 20 famous stadiums worldwide, such as Germany’s largest football stadium, Signal Iduna Park home of Borussia Dortmund (BVB) (capacity of 81,359 standing and seated), the Amsterdam Arena, home of Ajax Amsterdam in the Netherlands (capacity of 53,502 seats for football matches and 68,000 seats during concerts if a centre-stage setup is used), as well as national stadiums across the globe. Huawei also partnered with digital sports content provider FanPlay to provide streaming video in the U.K., starting with Glasgow Rangers’ Ibrox stadium in Scotland.