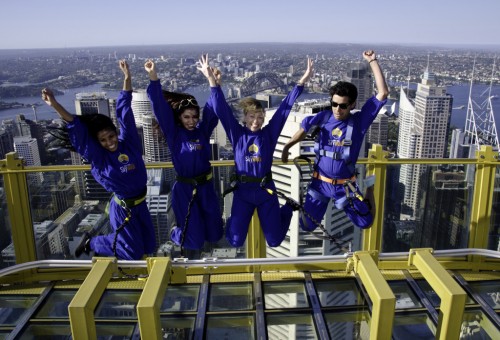 The Sydney Tower Eye and Madame Tussauds Sydney have been recognised as finalists in the highly contested 2012 NSW Tourism Awards.

Both attractions, owned by Merlin Entertainments Group, entered the NSW Tourism Awards for the first time, creating much excitement among staff after hearing the news of being finalists for the prestigious awards.

Sydney Tower Eye is now eligible for the top award in the Major Tourist Attraction category, while Madame Tussauds Sydney will vie for the number one spot in the New Tourism Development category.

After relaunching in September 2011, Sydney Tower Eye is the highest viewing point in the city and is home to Sydney's first 4D cinema. It offers an enhanced visual experience from the Observation Deck, which includes multilingual interactive touch panel screens and high-powered binoculars, as well as a unique SKYWALK outdoor experience.

A delighted Sydney Tower Eye General Manager Ian Wood stated "it's a great honour to be a finalist this year and I am very proud of our team for all of their hard work and dedication.

"Our attraction certainly appeals to the international market, and over the qualifying period we have really focused on ensuring the Sydney Tower Eye also becomes a brand that is synonymous with Sydney and that Sydneysiders are proud to have the attraction in their city.

"Introducing a Sydneysider pass as well as putting on fantastic local events such as the highest speed dating event, afternoon tea above the clouds, and encouraging local artists to come up and paint the awesome views of their great city has really helped us find a place on our locals 'to visit list'."

Madame Tussauds Sydney opened its doors in Darling Harbour to the public in April 2012 at a total cost of $14 million. The attraction gives Australians and international visitors the opportunity to come face-to-face with some of the world's most famous celebrities via a unique collection of amazingly lifelike wax figures in a unique, interactive setting.

"Both myself and the Madame Tussauds team are extremely proud of the attraction not only because of the successful launch campaign that has encouraged many local and international guests to get up close and personal with their famous heroes, but also because of the great feedback we get on a daily basis about how much people have enjoyed their visits."

Merlin Entertainments operates over 90 attractions around the world, 12 of which are in Australia including the all new SEA LIFE Sydney Aquarium, WILD LIFE Sydney Zoo, Mount Hotham and Falls Creek Ski Resorts in Victoria as well as Melbourne Aquarium.

The NSW Tourism Awards ceremony will be held at Le Montage, Lilyfield, on Thursday, 22nd November.

For more information go to www.nswtourismawards.com.au/