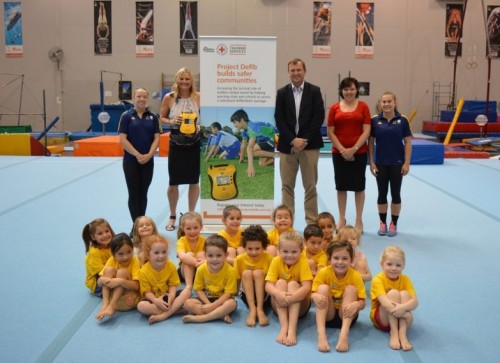 Gymnastics Australia has announced a national commitment to ‘Project Defib’ - a Red Cross initiative which aims to reduce the number of deaths caused by sudden cardiac arrest by making defibrillators and related training and support, accessible to all sporting clubs, schools and not for profits across Australia.

Gymnastics Australia’s involvement with the program was announced last Friday at a launch held at BTYC Gymnastics Club in the Melbourne suburb of Donvale.

As the program’s Ambassador, Australian athletics and Olympic legend, Gainsford-Taylor said that although many people think cardiac arrest can only affect older Australians, this is in fact not the case.

Gainsford-Taylor stated “the scary thing is that anyone of any age can suffer a cardiac arrest without warning.

“In fact, every year 30,000 Australians suffer from cardiac arrest, of which only 5% survive. Immediate access to a defibrillator can increase this to a 70% survival rate if applied within minutes of a sudden cardiac arrest.

“This is the reason why I became an Ambassador of Project Defib; I truly believe that a sporting club’s access to a defibrillator is vital, and should be a duty of care to not only to protect their athletes, but also their spectators, coaching staff, and volunteers.

“We celebrate the proactive approach of Gymnastics Australia, as it is never too soon to have these life-saving devices amongst our community.” 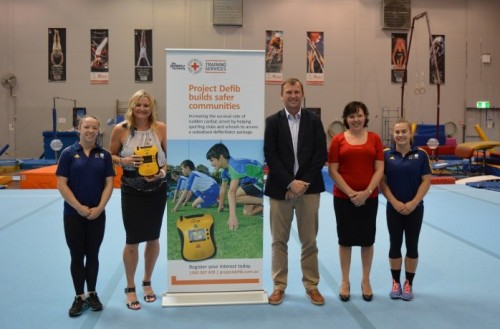 “With gymnastics clubs such as BTYC often serving as a communal meeting place for the wider community – including parents, friends, coaches and volunteers - I would encourage all of our clubs to sign up and take part in this initiative for the health and wellbeing of the gymnastics family as a whole.”

Gymnastics Australia has 535 affiliated clubs across Australia and the Australian Red Cross is pleased to offer all gymnastics clubs access to the subsidised package which includes the defibrillator, accessories and a user demonstration within most metro areas.

Instead of paying the full price of $4,200, Red Cross will subsidise clubs electing to participate in the program $1,600, meaning the club will just have to fundraise the remaining $2,600 for the life-saving machine.

For more information go to www.projectdefib.com.au