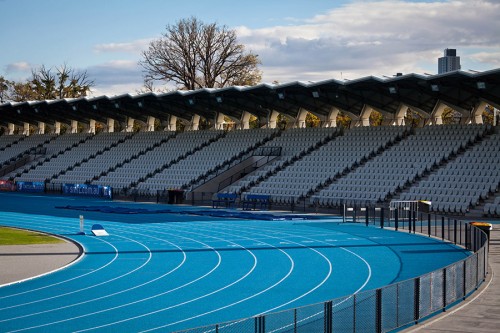 Victoria's premier athletics venue, Lakeside Stadium in Albert Park, is set to deliver a top line-up of athletics events in 2014 with Athletics Australia awarding Melbourne the rights to host next year's Australian Athletics Championships and the IAAF Melbourne World Challenge.

Victorian Minister for Sport and Recreation Hugh Delahunty announced the good news as well as a $120,000 Victorian Government funding package from the Significant Sporting Events Program for the elite athletics double header.

Minister Delahunty explained "the Coalition Government is committed to maintaining, developing and attracting top sporting events and athletes to Victoria.

"This funding boost not only welcomes back Australia's premier athletics meet to Victoria but ensures the nation's top athletes continue to have the best platform to take on the world.

"There is a lot at stake, with the Championships providing our stars of the future with the chance to qualify for big international meets including the upcoming Commonwealth Games in Glasgow.

"The world-class athletics track at Lakeside Stadium will deliver the electrifying atmosphere our sporting capital is renowned for and will provide the ideal venue for our up-and-comers to excel."

Minister Delahunty said the Championships will complement the International Association of Athletics Federations (IAAF) Melbourne World Challenge which sees some of the world's best athletes come to Lakeside to compete in the first of a world-wide 15-meet series hosted by the IAAF.

Minister Delahunty added "events like these attract large numbers of visitors, provide a stimulus for the economy and showcase athletes whose performances help to inspire us all to take sports participation to a whole new level.

"More importantly by hosting elite athletics events we can continue to show local and international athletes and sports fans just why Victoria is considered one of the sporting centres of the world.

"These are also just some of the reasons why I was delighted to recently announce a $6.4 million budget boost towards ensuring Lakeside Stadium as well as the Melbourne Sports & Aquatic Centre, and State Netball Hockey Centre, remain at the top of their game.

"Funding for these venues will set Victoria up for future growth, maintain our title as the premier venue for sports in Australia and ensure we can continue to attract the big events like the Australian Athletics Championships and the IAAF Melbourne World Challenge for years to come."

Athletics Australia Chief Executive Dallas O'Brien welcomed the announcement, stating "Lakeside Stadium is one of the best venues for athletics in the country, providing world-class facilities for athletes, officials and spectators.

"For this reason, it is the ideal location for the IAAF Melbourne World Challenge and the Australian Athletics Championships, incorporating the Commonwealth Games Selection Trial, in 2014."

Lakeside Stadium in Albert Park was the cover feature in the May/June 2013 issue of Australasian Leisure Management.