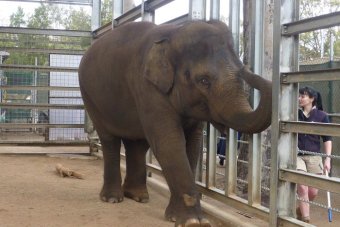 Keepers at Melbourne Zoo have advised that a baby elephant born with a rare condition that prevented it from standing has stood up for the first time.

The two-and-a-half weeks old animal was able to stand for a short period of time after medical staff removed casts from its front legs.

But Zoo staff warned the female Asian elephant was still critical, despite these "small wins."

The calf has been diagnosed with a congenital carpal flexure, a condition that prevented the calf from straightening the ankles on its front feet.

Although the condition is thought to be rare in Asian elephants, it is not uncommon in horses and equine specialists from the Melbourne University Veterinary School were called in to help.

Senior veterinarian Dr Michael Lynch said the calf's condition had improved to the point where the casts were no longer needed.

Dr Lynch explained "once we took that cast off, she actually stood up with us balancing her for a short period of time.

"She's showing some strength but she can't consistently stand up unaided."

The calf is having "intensive physiotherapy" but remains weak because it is not getting enough nutrition by suckling with an intravenous drip is being used to supplement feeding.

Dr Lynch stated "her muscles are getting quite weak, especially in her hind quarters, so we're working on that to encourage their strength and tone.”

And until the calf can stand on its own the calf it will not be able to spend time in the same enclosure as the mother, Num Oi.

Dr Lynch added "twice a day she's spending time with her mother just through a fence and they're both showing interest in each other and that's really important to have that bond.”

The situation, for now, remains critical with a huge team of veterinary and zoo staff working 24-hours-a-day to care for the calf.

Dr Lynch added "she's a real fighter. She really wants to get up and we encourage her with those efforts.

"She's frustrated if the feeding's not going well, she gives little roars.

"Of course everyone's fallen in love with her and just admiring spirit and her will to keep on going."

Image: Elephant mother Num Oi and her calf have been bonding through a fence. Courtesy of Melbourne Zoo.