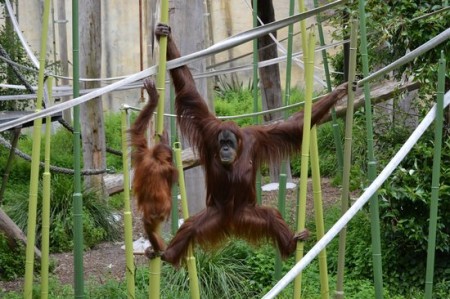 Melbourne Zoo has rejected claims from a senior Malaysian palm oil industry executive of animal neglect in its orangutan exhibit, saying it is an attempt to divert attention from the environmental damage caused by oil palm plantations.

The head of the Malaysian Palm Oil Council, Dr Yusof Basiron, visited Melbourne last week, and went to Melbourne Zoo's orangutan exhibit while in the city.

The Zoo is running a campaign which links palm oil production to the destruction of South East Asian rainforests. There are signs outside the orang-utan display explaining the campaign.

Melbourne newspaper The Age reported that after his visit, Dr Basiron told Malaysia's national news agency Bernama that he was "appalled" at the living conditions of the orangutans, which were exposed in Melbourne's winter cold.

Dr Basiron said that the orangutans "were shivering and making noises, which I recognise(d) as distress calls."

Earlier, Dr Basiron had said that the posters displayed at the Zoo "were found to be offensive by a visiting Malaysian tourism minister as they contained insinuations which do not reflect the true situation of how orangutans have long been cared (for) here in Malaysia."

Melbourne Zoo Director of Wildlife Conservation and Science, Rachel Lowry, said it was not true the orangutans were treated badly at the Zoo, and that their exhibit featured an integrated heating system.

Lowry suggested that the allegations had little to do with the conditions Melbourne's orangutans were kept in and that Dr Basiron's comments were "to divert attention from what orangutans are facing in the wild."